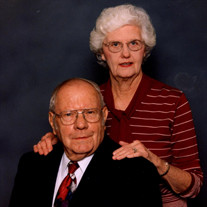 Mr. William Otis “Bill” McMullan, Jr., 97, of Elberton, Georgia passed away Friday, September 4, 2020 with his family at his side. Born on September 4, 1923, Bill was the son of the late William Otis and Sadie Harris McMullan. He was the husband of Karma Knell McMullan, and had celebrated almost 64 years of marriage together. Bill was a veteran of the United States Air Force, having bravely served his country during World War II. He was a faithful member of First Baptist Church, Elberton. Though born in Elberton, Bill’s family soon moved to Cornelia where he grew up and later graduated from Cornelia High School. He went on to earn his Bachelor’s degree in textile engineering from Clemson University, and as an IPTAY member enjoyed having season football tickets every year. Bill’s career began as a manager at Elberton Mills, and later led him to Rapier Cambridge Mills where he worked as Vice President until his retirement at the age of 72. All who knew Bill will forever remember him as a kind and compassionate man who loved his Lord first and foremost, his beloved family, and last but not least, his alma mater, Clemson University. Bill is survived by his wife, Karma Knell McMullan; sons and daughters-in-law, William O. “Bill” McMullan III of Elberton, Robert and Laura McMullan of Greenville, and John and Whitney McMullan of Athens. He also leaves behind grandchildren: Leda and her husband, Wes McClendon, and their children Ethan, Payton, and Lennox all of LaGrange, Anna McMullan of Greenville, SC, and Harris McMullan and Lucy Clair McMullan, both of Athens; a brother and sister-in-law, Richard and Susan McMullan of Cornelia; and a brother-in-law, Robert L. Knell, Jr. of Stone Mountain. Bill was preceded in death by a brother, John Harris McMullan. A graveside memorial service was held Saturday, September 12, 2020 at 1:00 p.m. in Elmhurst Cemetery with Rev. Gary Purvis officiating. Arrangements for Mr. William “Bill” McMullan, Jr. were in the care of Hicks Funeral Home and Cremation Services of Elberton.

The family of Mr. William "Bill" McMullan Jr. created this Life Tributes page to make it easy to share your memories.

Send flowers to the McMullan family.