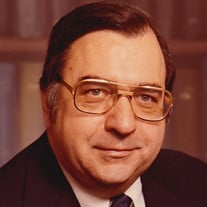 William Augustus &#8220;Bill&#8221; Kelly passed away Friday, July 11, 2014 at his home in Rome. He lived in Elberton from 1951 through 2010 and moved to Rome in 2010, residing at Renaissance Marquis Retirement Center. Born in Athens on February... View Obituary & Service Information

The family of Mr. William A. Kelly created this Life Tributes page to make it easy to share your memories.

Send flowers to the Kelly family.