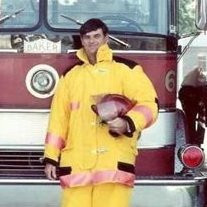 Mr. Wayne “PeeWee” Guest, 64, of Elberton, passed away Wednesday, May 29, 2013 at his home. Wayne was born in Greenwood, South Carolina on January 17, 1949 to the late James Malcolm and Evelyn Fleming Guest. Wayne moved to Elberton with his family in 1954 where he attended public school. He graduated from Elbert County High School in 1967 and attended Athens Technical College. He started his career as a firefighter with the Elberton Fire Department on July 6, 1969. He was promoted to Lieutenant in 1973 and again to Captain in 1984. He was appointed Fire Chief in 1998 and retired in 2005. Wayne was a member of Philomathea Masonic Lodge, Oliver Chapter of Royal Arch Masons Yarab Shriner and a member of the Granite City Shrine Club. He was also a member of Francis Asbury United Methodist Church. Wayne is survived by his wife of 45 years, Mary Hufstetler Guest, children: Jeff (Donna) Guest of Kennesaw, GA, Jennifer Guest (Elton) Stallman Wentzville, MO and Katherine Guest of Marietta, GA; grandchildren: Ryan Harris, Russell Stallman and Nathaniel Guest. He is also survived by his sisters: Deryl (Donald) Alewine of Royston, GA, Joan (the late Marvin) Wilson of Tignall, GA, Shirley (the late James) Johnson of Elberton, GA, Donna (the late Charles) Liles of San Antonio, TX, and Lisa (Glenn) Gunter. Memorial services for Mr. Guest were held on Saturday, June 8, 2013 at 2:00 p.m. in Francis Asbury United Methodist Church. A time for visitation was from 1:00 to 2:00 p.m. at the church just prior to the service. In lieu of flowers memorials may be made to Francis Asbury United Methodist Church, 1016 Ruckersville Road, Elberton, Georgia 30635 You may express condolences to the family at www.hicksfuneral.com. Arrangements for Mr. Wayne “PeeWee” Guest were in the care of Hicks Funeral Home of Elberton.

Mr. Wayne “PeeWee” Guest, 64, of Elberton, passed away Wednesday, May 29, 2013 at his home. Wayne was born in Greenwood, South Carolina on January 17, 1949 to the late James Malcolm and Evelyn Fleming Guest. Wayne moved to Elberton with his... View Obituary & Service Information

The family of Mr. Wayne Guest created this Life Tributes page to make it easy to share your memories.

Send flowers to the Guest family.