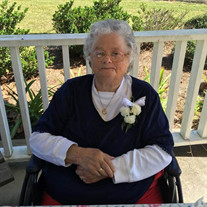 Mrs. Verna Grace Jennings Baston, 89, of Elberton passed away Saturday, June 16, 2018 at Nancy Hart Nursing Center. A native of McCormick, South Carolina, &#8220;Bunny&#8221; as she was affectionately called, was the daughter of the late Paul... View Obituary & Service Information

The family of Mrs. Verna "Bunny" Baston created this Life Tributes page to make it easy to share your memories.

Send flowers to the Baston family.