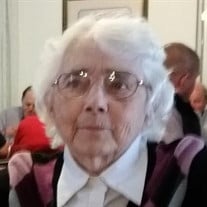 Mrs. Vera Davis Fowler, 85, of Elberton, Georgia passed away at her home Sunday evening, June 14, 2015, surrounded by her family. Mrs. Fowler was born in Greenwood, South Carolina, daughter of the late Arthur Manis and Thelma Burdashaw Davis. She was first married to the late Willie Lankford, and later to the late Frank Fowler. Mrs. Fowler worked until her retirement as a store manager for Kenwin Shops, Inc. Throughout her life, Mrs. Fowler enjoyed ministering to others as a Sunday School teacher and through music in churches and nursing homes. She was a devoted member of the Elberton Church of God. Mrs. Fowler is survived by two daughters: Deanna Beggs, and Lucy Black and her husband, William, all of Elberton; a son, Randy Lankford and his wife, Lavada of Ellaville; twelve grandchildren; and 31 great-grandchildren. She also leaves behind two sisters, Rallie McCoy and Valeria Rainaud. In addition to her parents and husbands, Mrs. Fowler was preceded in death by two sons, Fred Lankford and Mark Lankford; a son-in-law, David Beggs; and a brother, Teasley Davis. A service to celebrate Mrs. Fowler’s life was held on Tuesday, June 16, 2015 at 11:00 a.m. at the Elberton Church of God, with Bishop James Gunn officiating. Visitation was at the church at 10:00 a.m. just prior to the service. In lieu of flowers, memorial contributions may be made to the Elberton Church of God at P.O. Box 454, Elberton, GA 30635, or the Canon Church of God at 370 Starrs Bridge Rd, Canon, GA 30520. Online condolences may be expressed to the family at www.hicksfuneral.com. Hicks Funeral Home was honored to care for the family of Mrs. Vera Davis Fowler.

The family of Mrs. Vera Davis Fowler created this Life Tributes page to make it easy to share your memories.

Send flowers to the Fowler family.