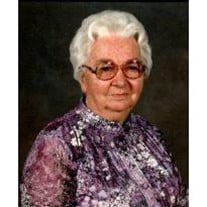 Mrs. Velma Elizabeth Smith Moon, of 215 Orchard Dr., Greenwood, South Carolina, passed away at The Hospice House on September 12, 2011. Mrs. Moon would have been 102 on her birthday on October 14. Mrs. Moon was born in Elberton, GA to Asbend Coleman and Katie Sumter Moore. She was twice married, first to the late Dewitt Talmadge Smith, and then to the late George Henry Moon. Mrs. Moon was the oldest of eleven children. She loved gardening and fishing, and always loved and cherished her family. She was a caregiver for many people, both family and friends. She was of the Baptist faith. Mrs. Moon is survived by two daughters, Sallie Alexander and Louise Raborn, both of Greenwood, SC; three step-daughters: Mildred Slay and Mattie Lou Yeargin, both of Elberton, GA, and Ruth Raborn of Jackson, SC; and one step-son, Walter Moon, of Greenwood, SC. She is also survived by two granddaughters and two great-granddaughters, a number of step-grandchildren, step-great-grandchildren, and step-great-great-grandchildren. She also leaves behind one brother, A.C. Moore of Greenwood, SC, and numerous nieces and nephews. Mrs. Moon was preceded in death by a son, Dewitt Talmadge Smith, Jr.; step-sons: Elmer, Aubry, Henry, J.E., Dorsey, Lewis, and Philip Moon; step-daughters: Addie Stone, Mary Scarborough, and Corine Kinard; brothers: Herman, Howard, Julian, and Leland Moore. Funeral services will be held at Flatwoods Pentecostal Holiness Church on Thursday, September 15, 2011 at 3:00 p.m. with visitation for family and friends from 1:00-3:00 p.m. prior to the service. Interment will be at Forest Hills Memorial Park. Flowers are appreciated, or donations may be made to Hospice Care of The Piedmont, 408 W. Alexander Ave., Greenwood, SC, 29646. Online condolences may be expressed to the family at www.hicksfuneral.com. Hicks Funeral Home is honored to be serving the family of Mrs. Velma Elizabeth Smith Moon.

Mrs. Velma Elizabeth Smith Moon, of 215 Orchard Dr., Greenwood, South Carolina, passed away at The Hospice House on September 12, 2011. Mrs. Moon would have been 102 on her birthday on October 14. Mrs. Moon was born in Elberton, GA to Asbend... View Obituary & Service Information

The family of Velma Elizabeth Smith Moon created this Life Tributes page to make it easy to share your memories.

Send flowers to the Moon family.