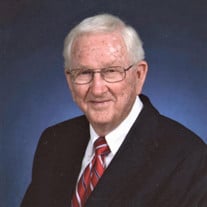 Mr. Thomas Walton Howell, 92, passed away Sunday, November 22, 2020. A native of Hart County, he was the son of the late Thomas Judson and Ada Brown Howell. Mr. Howell retired from the U.S. Corps of Engineers. He was a faithful member of Rock... View Obituary & Service Information

The family of Mr. Thomas Walton Howell created this Life Tributes page to make it easy to share your memories.

Send flowers to the Howell family.