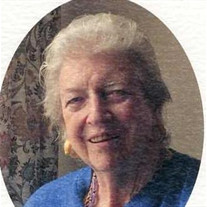 Death of a member of one of Elberton’s Founding Families Shelton Oliver Addyman, 79, of York England and Elberton passed away Nov. 25, 2016. The death of Shelton Oliver Addyman at her home in York, England on 25th November brought to an end her long association with Elberton. Shelton was the only daughter of Stanley and Sue Oliver of Atlanta, and niece of Eleanor Oliver of Elberton. From her earliest childhood Shelton spent the long summer break in the Oliver House on South McIntosh Street, which the family had owned since the 1870s, and she continued to spend part of the year there until last year. Her Oliver ancestors were amongst the founders of Georgia and of Wilkes County. Shelton presided at the re dedication some years ago of the graves in Stinchcombe Churchyard of her direct ancestor Dionysius Oliver, founder of the town of Petersburg, now submerged under the Clark Hill Reservoir, and of Peter Oliver, his brother. Both were at that time recognized as Patriots for their roles in the War of Independence. The Oliver family gave its name to South and North Oliver Streets in Elberton. The family had substantial estates in the Dove Creek area, and her grandfather, Alfred Oliver, was a respected doctor in Elberton, the owner of Elberton’s first car, and the introducer of many medical innovations - including the thermometer - to the area in the late 19th and early 20th century. Shelton majored in Chemistry at Emory University and became head of Science at O’Keefe High School in Atlanta. She then studied for a higher degree, in archaeology, reflecting the archaeological interests of her Oliver ancestors in Georgia, at the University of Pennsylvania . She met her future husband, the British archaeologist Peter Addyman, while on an archaeological expedition to Britain. They married in 1965 and Shelton moved to Belfast, Northern Ireland where Peter was a faculty member at the Queen’s University of Belfast. Peter’s career took them next to Southampton, England, where Peter helped to set up a new academic Department in Archaeology in the university and Shelton became administrator of his many excavations on medieval castles and towns in England. In 1972 they moved to York, England, one of Britain’s most historic towns, where Peter became the founding Director of the now world-famous York Archaeological Trust. Inspired in part by their joint knowledge of Colonial Williamsburg, Peter and Shelly were instrumental in developing the Jorvik Viking Centre, an immensely popular exposition of the story of Viking York. They reconstructed replicas of the Viking houses that their team had excavated on the site where they had been found, deep below modern York. The site was subsequently developed as a shopping mall, with the living Viking world visitable below. 19 million visitors have so far seen this innovative way of presenting the past. Shelton as hospitality officer for the project, had the job of welcoming distinguished visitors, including patrons the Prince of Wales, Queen Margrethe of Denmark, King Harald of Norway, and the President of Iceland. Later visitors included Lady Bird Johnson, widow of US President Lyndon B Johnson. Shelton and Peter had two children, Thomas Oliver, an historic buildings conservation specialist in Edinburgh, Scotland, and Sue, an officer with the Cobb County Fire Department in Atlanta who maintains the family‘s connection with Elberton. There are four grandchildren, Oscar, Oliver, Harry and Tatiana. A funeral service was held in the church of St Olaf, in York, England, in December. St Olaf was a Viking saint and the church was established as early as 1052. A memorial service was held on Monday, April 3rd, at 2:30 pm, in St. Alban's Episcopal Church in Elberton with Father Keeler officiating, after which, Shelton's remains were returned to the family plot in Elmhurst Cemetery.

The family of Mrs. Shelton Oliver Addyman created this Life Tributes page to make it easy to share your memories.

Death of a member of one of Elberton’s Founding Families

Send flowers to the Addyman family.