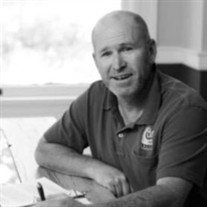 Scott Webb, age 57, entered his eternal home on Thursday, March 17, 2022- the day before his 33rd wedding anniversary. Scott was born in Macon to the late Frank Webb and Rose Boyd Webb. He was a proud graduate of “Goosepond University,” of which he loved to tell stories about. Most everyone also knows he loved to tell any story that would bring about laughter and a smile. Scott never met a stranger due to his self-proclaimed sense of humor, and to know him was to love him. He was dedicated to his construction job where he was a superintendent with DSI, Incorporated- it is no surprise he liked to share stories about this aspect of his life as well and brag about different projects he was a part of. When he wasn’t working or telling his stories, Scott could be found in his chair- or as he called it the best seat in the stadium- watching golf, the Bulldogs, or Nascar. However out of everything he loved, his greatest joy was being “Daddy Rabbit” and “G Rabbit.” Scott had more than one family whom he took great pride in: his church family at Liberty Baptist Church, his work family, and his livestock family- some would even say his children were raised in a barn. He is survived by his loving and devoted wife, Robin Webb; children, Anslee Webb (Peyton Mitchell), Meredeth Webb, Jaime Wolf (Kody), Grace Freeman (Caleb), Griffin Webb, Elise Webb, Lyndon Webb, Butler Webb, and Ethan Frisbey; sister, Leigh Nash (Mark); and nephew, Nick Ruff. “G Rabbit” is also survived by his grandchildren, Mary Freeman, Stella Freeman, Kooper Wolf, and Kashen Wolf. And scheduled to arrive (very) soon is Kaden Wolf. Scott’s life was celebrated during the 11:00 A.M. worship service at Liberty Baptist Church on Sunday, March 20, 2022. His pastor and friend, Reverend Andy Buchanan officiated. The family had a time of visitation following the service from 1-2:00 P.M. at the church. Interment was private in Hillcrest Cemetery, Bowman. Honored to serve as pallbearers were Peyton Mitchell, Nick Ruff, Kody Wolf, Cody Moss, Kenny Bugg, and Caleb Freeman. The Men’s Sunday School class served as honorary pallbearers. Memorials may be directed to Liberty Baptist Church, P.O. Box 811, Hartwell, Georgia 30643. Scott never hesitated to lend a hand to someone in need and that legacy will continue through his family’s decision for him to be an organ and tissue donor. One donor can save up to 8 lives and improve the lives of more than 75 more. Arrangement for Mr. Scott Webb were in the care of Hicks Funeral Home & Cremation Services of Elberton.

Scott Webb, age 57, entered his eternal home on Thursday, March 17, 2022- the day before his 33rd wedding anniversary. Scott was born in Macon to the late Frank Webb and Rose Boyd Webb. He was a proud graduate of &#8220;Goosepond University,&#8221;... View Obituary & Service Information

The family of Mr. Scott Webb created this Life Tributes page to make it easy to share your memories.

Send flowers to the Webb family.