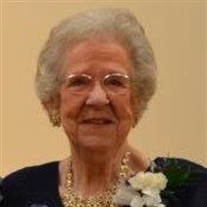 Mrs. Rose Ann McLanahan Thompson, 89, of Elberton, Georgia, passed away on Thursday, January 2, 2020 in Piedmont Athens Regional Hospital. Mrs. Thompson was born and raised in Elberton, Georgia, daughter of the late Robert and Hassie McMullan McLanahan. She grew up in a loving and caring home with three sisters and three brothers. After high school, Rose Ann married Paul Howard Thompson, Jr. and moved to Wilmington, South Carolina where she attend nursing school. After finishing school, she and Paul moved back to Elberton, where she began her career at Elbert Memorial Hospital as a nurse in the Operating Room. She was later hired at The Medical Center of Elberton, working for Drs. O’Neal, Hanks, and Norman, and worked there until her retirement. Mrs. Thompson was a very caring person that was always there for her family and friends, and had more love for them than anyone knew. She was a completely selfless person who always put the needs of others first. Mrs. Thompson is survived by her children, Sandra Greene of Elberton, and Paul Clark Thompson (Nena) of Bowman. She also leaves behind grandchildren, Justin Greene (Samantha), Michael Hughes, and Corey Hughes; and great-grandchildren: Samson Greene, Addelynn Barrett, Brysin Hughes, Ryder Hughes, and Isaiah Hughes; and her brother, David McLanahan. In addition to her parents and her husband, Mrs. Thompson was preceded in death by three sisters: Betty Jane Giannoni, Louise Webb, and Madge Oglesby; and two brothers: Bob McLanahan and Neal McLanahan. A Memorial Service to celebrate Mrs. Thompson’s life was held on Monday, January 6, 2020 at 1:30 p.m. in The Chapel of Hicks Funeral Home. A time of visitation for family and friends began at 12:30 p.m. just prior to the service. A private interment followed at Elmhurst Cemetery. In lieu of flowers, memorial contributions may be made to St. Jude Children’s Hospital at 501 St. Jude Place, Memphis, TN 38105. Arrangements for Mrs. Rose Ann McLanahan Thompson were in the care of Hicks Funeral Home & Cremation Services of Elberton.

The family of Mrs. Rose Ann McLanahan Thompson created this Life Tributes page to make it easy to share your memories.