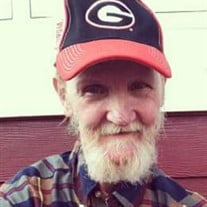 Mr. Ronald Scoggins, 65, of Comer, passed away Thursday, April 2, 2020 in Piedmont Athens Regional Hospital. A native of Oglethorpe County, he was the son of the late John Dolph Scoggins. He was also preceded in death by his wife, Cathy Dianne... View Obituary & Service Information

The family of Mr. Ronald Scoggins created this Life Tributes page to make it easy to share your memories.

Send flowers to the Scoggins family.