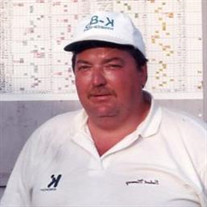 Mr. William Robert Mooney, 59, of Elberton, Georgia, passed away Sunday, December 25, 2016 at Piedmont Athens Regional, while holding his daughter’s hand as she stood at his side. Mr. Mooney was born January 1, 1957 in Gainesville, Georgia to the late Newton Clyde and Mary Seabolt Mooney. He worked for years as a machinist, and later in life was a highly skilled gunsmith. Mr. Mooney was an avid skeet shooter, World Champion winner, and held numerous Georgia state titles. He was later inducted into the Georgia Skeet Shooter’s Hall of Fame. Mr. Mooney is survived by two daughters: Dr. Melanie Marie Henson and her husband, Lance, of Warner Robins, and Whitney Hope Mooney; and the love of his life, Marie Bowers Mooney, of Elberton. He also leaves behind three grandchildren: Wyatt Mark Henson, Colton Robert Henson, and Merci Grace Hope Mooney; and a sister, Traci Schmitt. In addition to his parents, Mr. Mooney was preceded in death by a very special grandmother, Gertrude Elizabeth Davis, who raised him and to whom he lovingly referred to as “Mom.” A service to celebrate Mr. Mooney’s life was held on Wednesday, December 28, 2016 at 2:00 p.m. in The Chapel of Hicks Funeral Home, with Rev. Kenny Martin officiating. A time of visitation for family and friends began at 1:00 p.m. just prior to the service. Interment followed at Forest Hills Memorial Park, with Kenneth Worley, John Mercer, Allen McCannon, Donnie Matthews, Lance Henson, and Mark Henson serving as pallbearers. In lieu of flowers, memorials may be made to St. Jude Children’s Hospital at P.O. Box 1000, Dept. 142, Memphis, TN 38101, or online at stjude.org. Arrangements for Mr. William Robert Mooney were in the care of Hicks Funeral Home & Cremation Services of Elberton.

Mr. William Robert Mooney, 59, of Elberton, Georgia, passed away Sunday, December 25, 2016 at Piedmont Athens Regional, while holding his daughter&#8217;s hand as she stood at his side. Mr. Mooney was born January 1, 1957 in Gainesville, Georgia... View Obituary & Service Information

The family of Mr. Robert Mooney created this Life Tributes page to make it easy to share your memories.

Send flowers to the Mooney family.