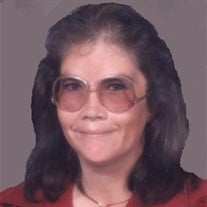 Mrs. Pamela B. New, 55, of Elberton, Georgia passed away Monday, November 28, 2016 at Piedmont Athens Regional Hospital. Mrs. New was born December 26, 1960 in Elbert County, and was the daughter of John Boger of Florida, and Linda Ray Hawkins of Elberton. She is survived by her husband of 37 years, James New, Jr., and had worked for 22 years at Pilgrims’ Pride. In addition to her husband and parents, Mrs. New is survived by two sons: James New, III of Bowman, and Wayne New of Elberton; a sister, Tammaney Holcombe of Adairsville; and a half-sister, Monica Parks of Hendersonville, TN. She also leaves behind 5 sisters-in-law: Mary Ann New, Lillie Landford, Deborah New, Millie Fakey, and Barbara New. A service to celebrate Mrs. New’s life was held Thursday, December 1, 2016 at 2:00 p.m. in The Chapel of Hicks Funeral Home, with Rev. Gary Purvis officiating. A time of visitation began at 1:00 p.m. just prior to the service. Interment followed in Elmhurst Cemetery. Arrangements for Mrs. Pamela B. New were in the care of Hicks Funeral Home & Cremation Services of Elberton.

The family of Mrs. Pamela Boger New created this Life Tributes page to make it easy to share your memories.

Send flowers to the New family.