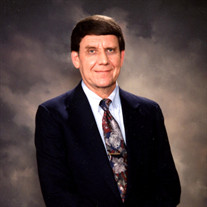 Dr. Norman Thompson Holloman, 79, of Elberton, Georgia, husband of 57 years to Carolyn Bradberry Holloman, graduated to Heaven Saturday, June 1, 2019 at Piedmont Athens Regional Hospital. His final days were spent surrounded by the love of his family and close friends. Dr. Holloman was born in the Vesta community of Oglethorpe County and was baptized into the Vesta Baptist Church at an early age. He was born on November 29, 1939, the son of the late Ruth Hazel Thompson Holloman and William Wade Holloman. He moved to Elberton at the age of 15, when his mother passed away, with his father and two brothers. Thompson graduated from Elbert County High School as Valedictorian at a time when classes were being held in the Methodist and Baptist churches after a fire destroyed the high school. Thompson attended Berry College on a National Guard essay scholarship he won in the state of Georgia. When he completed his year at Berry, he had the highest average of any male student and was offered a special scholarship. He attended Lander College in Greenwood, South Carolina, where Carolyn was working for a United States Representative, Bryan Dorn. Their identical twin boys, Michael and Jeffrey, were born at this time prematurely and died shortly after birth. He graduated with high honors from the University of Georgia. He is a graduate from the University of Georgia Banking School and a graduate of The Stonier Graduate School of Banking--Rutgers University. He had a career in banking and was a vice-president and a director at both Granite City Bank and First National Bank in Elberton. He was a member of the Elberton Rotary Club. He received a Masters from Erskine Theological Seminary and a Doctor of Ministry there. He graduated with high honors. Dr. Holloman was ordained into the ministry June 16, 1991, at the First Baptist Church in Elberton. He served as pastor of Cedar Grove Baptist Church in Comer and Carters Grove Baptist Church in Taliaferro County for 12 years. He served as interim pastor at County Line Baptist Church, Bethesda Baptist Church, Phillips Mill Baptist Church, and preached at other churches in Georgia and South Carolina. Dr. Holloman is survived by his wife, Carolyn Bradberry Holloman, and his daughter, Dr. Lisa Carol Holloman; his nephew, Dr. Kevin Holloman; and a niece, Terri Holloman Lutz. Funeral services for Dr. Holloman were held on Wednesday, June 5, 2019 at 12:00 p.m. in The Chapel of Hicks Funeral Home. Interment followed in Elmhurst Cemetery. A time of visitation began at 11:00 a.m. just prior to the service. Flowers were graciously accepted. Hicks Funeral Home and Cremation Services of Elberton was in charge of arrangements for Dr. Norman Thompson Holloman.

The family of Dr. Norman Thompson Holloman created this Life Tributes page to make it easy to share your memories.

Send flowers to the Holloman family.