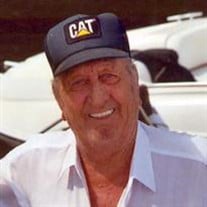 Neal T. McLanahan, of 1227 Country Club Lane, Elberton, Georgia, passed away Wednesday, October 27, 2010, after living an extraordinarily blessed life with his devoted family. He was 84 years old. Born in Elberton, Neal was the son of the late Robert Rice and Hassie McMullan McLanahan. He was a United States Navy veteran of World War II where he served as a deep sea diver. Upon returning home from the service, he founded McLanahan Crushed Stone, Inc. and was active in his company for the past 50 years, recently passing it on to his son Rod McLanahan. Mr. McLanahan especially loved the outdoors and enjoyed many hunting trips to Africa, Central America and Nepal. Nothing gave him more pleasure than entertaining family and friends at Shangri-La, his lake house on Lake Thurmond. He was a member of the First United Methodist Church, the Philomath Masonic Lodge 25, the Yaarb Shrine Temple, VFW, Elks Club, Georgia Crushed Stone Association, Elberton Country Club, and an honorary member of the East African Professional Hunters Association. Mr. McLanahan is survived by his wife of 60 years, Mary D’Amico McLanahan, three daughters, Marilyn (Marny) Perry and Phyllis Gagne of Athens and Janet Goossens of Elberton, a son, Ronald Neal (Rod) McLanahan of Elberton, five granddaughters, Cheyenne and Montana Perry of Athens, Jessie and Codie McLanahan of Elberton, Suzanne Goossens of Elberton, and one grandson, Zed McLanahan, presently in Afghanistan serving his country. Additionally, he is survived by two sisters, Betty Jane Giannoni and Roseanne Thompson, both of Elberton, and a brother David McLanahan of Gainesville, Florida. He was preceded in death by two sisters, Louise Webb of Elberton and Madge Oglesby of Athens, and a brother, Robert (Bob) McLanahan of Elberton. A memorial celebration of Neal’s life will be held at the Elks Club in Elberton on Saturday, October 30, 2010 from 11:00 a.m. to 1:00 p.m. PLEASE JOIN US IN SHARING YOUR FAVORITE MEMORIES OF NEAL. Light refreshments will be served. A private burial will be at Elmhurst Cemetery for immediate family only. The family respectfully requests no visitation at the homes or business. In lieu of flowers, memorials presented to a favorite charity are appreciated. Online condolences may be sent to the family at www.hicksfuneral.com. Hicks Funeral Home is in charge of arrangements for Mr. Neal T. McLanahan.

Neal T. McLanahan, of 1227 Country Club Lane, Elberton, Georgia, passed away Wednesday, October 27, 2010, after living an extraordinarily blessed life with his devoted family. He was 84 years old. Born in Elberton, Neal was the son of the... View Obituary & Service Information

The family of Neal T. McLanahan created this Life Tributes page to make it easy to share your memories.

Send flowers to the McLanahan family.