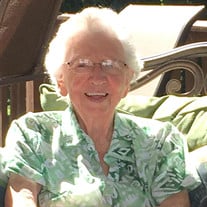 Mrs. Mildred Snellings Driver, lovingly known as “Meddie”, passed away Monday, February 8, 2016 at Elbert Memorial Hospital at the age of 93. Mrs. Driver was born in Elberton, Georgia on March 24, 1922 to the late Alex and Anna Thornton Snellings. She was the widow of Mr. Frank E. Driver, and worked for the State Dept. of Human Services until her retirement. She was a faithful member of Dewy Rose Baptist Church and the Dorcas Sunday School class. Mrs. Driver spent her life serving others, and was a dear friend to so many people. She will always be remembered for the great love she had for life, her family, and her church. Memories of Meddie’s incredible sense of spunk and humor will live forever in the hearts of those who loved her. Mrs. Driver is survived by her daughter-in-law, Kathryn Mason Driver; three grandchildren: Jennifer Harrington and her husband Chris, all of Pennsylvania, Kerry Driver and her husband David Hoffman of Singapore, and Matthew Driver and his wife Melanie of Vermont; four great-grandchildren: Ryan and Kieran Harrington, and Duke and Kam Hoffman; and several beloved nieces and nephews. In addition to her husband, Mrs. Driver was preceded in death by two sons: Walter Edmond Driver and Dan Richard Driver; brothers: Walter Arnold Snellings and Horace Snellings; and sisters: Hilda Snellings Hulme and Fairy Bell Snellings. A service to celebrate Mrs. Driver’s life was held on Saturday, February 13, 2016 at 12:00 noon in The Chapel of Hicks Funeral Home, with Rev. Gary Purvis officiating. Visitation began at 11:00 a.m. just prior to the service. Interment followed at Hillcrest Cemetery in Bowman, Georgia. In honor of Mrs. Meddie’s love for gardening and beautiful flowers, flowers were graciously accepted. Arrangements for Mrs. Mildred “Meddie” Driver were in the care of Hicks Funeral Home of Elberton.

The family of Mrs. Mildred "Meddie" Driver created this Life Tributes page to make it easy to share your memories.

Send flowers to the Driver family.