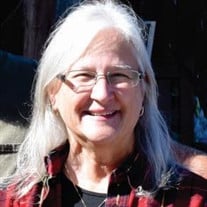 Mrs. Merrie Williams Colvard, 68, of 1577 Brewers Bridge Court of Elberton, Georgia passed away Tuesday, January 23, 2018 at Piedmont Hospital in Atlanta after a brief illness. Merrie grew up in Xenia, Ohio, daughter of the late James H. Williams and Nancy Gerlaugh Williams. She was the bride of Joe Colvard, with whom she had celebrated over 32 years of marriage. Merrie worked in the medical field as a Cardiac Technician / EMT for many years, and currently owned “The Bear Thread” of Elberton, specializing in custom embroidery. Along with her husband, Merrie also owned Emergency Vehicle Sales of Elberton. Merrie was a devoted member of Dewy Rose Baptist Church. She was also a member of Aldora Chapter #262 of Xenia, Ohio, and Past Worthy Matron of Rose M. Ashby Chapter #550 of Elberton, Order of the Eastern Star. She would have received her 50-year service award in June. She was a majority member of the Xenia Rainbow Chapter, and was awarded the Grand Cross of Color. In addition to her husband, Joe Colvard, of the home, Merrie is survived by two sons: Eric Wolf and Brent Naylor of Elberton; and one daughter, Tara Presley of Commerce. She also leaves behind two sisters: Jeni Williams Lowry of Pensacola, Florida, and Nancy Jean Williams of Xenia, Ohio; five grandchildren; and one great-grandchild. A service to celebrate Merrie’s life was held on Friday, January 26, 2018 at 3:00 p.m. in Dewy Rose Baptist Church, with Rev. Kenny Martin and Rev. Gary Purvis officiating. Interment followed in the church cemetery with Eric Wolf, Rob Krobel, Blake Thompson, Cameron Fleming, Ty Martin, Mike Webb, Tony Dickerson, and Glenn Henry serving as pallbearers. Free and Accepted Masons, along with members of the Order of the Eastern Star served as honorary pallbearers. A time of visitation was held on Thursday, January 25, 2018 from 6:00 to 9:00 p.m. at Hicks Funeral Home. In lieu of flowers, the family requests that memorial contributions be made to the Dewy Rose Baptist Church for the Lynch Kentucky Mission Fund, at P.O. Box 149, Dewy Rose, Georgia 30634. Arrangements for Mrs. Merrie W. Colvard are in the care of Hicks Funeral Home & Cremation Services of Elberton.

The family of Mrs. Merrie Williams Colvard created this Life Tributes page to make it easy to share your memories.

Send flowers to the Colvard family.