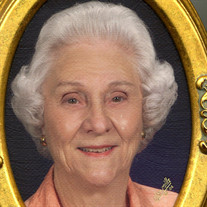 Mrs. Martha P. Miller, 88, of 124 Brookside Drive, passed away at 12:15 a.m. on Tuesday, February 3, 2015 at Emory University Hospital, Atlanta, Georgia. Mrs. Miller was born in Sumter, South Carolina on February 2, 1927 to the late William B. Pierson and Richmond Henley. She later moved to Augusta, Georgia where she lived until she married. She was the beloved wife of Mr. Harry J. Miller, Jr., and celebrated over 68 years of marriage with unending love and devotion. Mr. and Mrs. Miller moved to Elberton in 1946 to operate the Coca Cola Bottling Company. The many friends Mrs. Miller established during those early years grew and strengthened, being one of the most valued parts of her life. Mrs. Miller was a devoted wife, mother, homemaker, and friend to all. She loved her Lord, and was a faithful member of the First United Methodist Church of Elberton. She served there faithfully as she worked with Children’s Choir, Sunday School, and the Grief Committee. As “Mom” to her daughters, Mary and Fran, Mrs. Miller was a treasure of love, friendship, support, and wisdom. She lived by example, showing her love in countless ways. To her grandchildren she was “Mama”, and she expressed her love and devotion to them everyday. To nieces and nephews she was “Aunt Martha” --- always calling, checking, helping, keeping in touch, and being that tie that keeps families together. Her words to all would be, “I love you---and thank you.” A great lady leaves a great legacy---and those who come behind her wish to say, “Well done, Mom.” In addition to her husband, Mrs. Miller is survived by her daughter, Frances M. Veal and her husband, Allan C. Veal of Elberton; three grandsons: Adam Veal of Elberton, Trent Veal of Leesburg, FL, and Wesley Heffernan of Clayton, NC; and one great-grandson, Caleb Heffernan. Martha was preceded in death by a daughter, Mary Miller. A service to celebrate Mrs. Miller’s life was held on Thursday, February 5, 2015 at 11:00 a.m. at First United Methodist Church of Elberton with Rev. Joe Watson and Rev. Wallace Wheeles officiating. Visitation was at 10:00 a.m. in The Fellowship Hall just prior to the service. Interment followed at Elmhurst Cemetery in Elberton. Pallbearers were Adam Veal, Trent Veal, Wesley Heffernan, Frank Ouzts, Bill Ouzts, and Cole Pierson. Remembrances may be made to the First United Methodist Church at P.O. Box 398, Elberton, Georgia 30635. You may express condolences for the family at www.hicksfuneral.com. Hicks Funeral Home & Cremation Services was honored to serve the family of Mrs. Martha Pierson Miller.

The family of Mrs. Martha Pierson Miller created this Life Tributes page to make it easy to share your memories.

Send flowers to the Miller family.