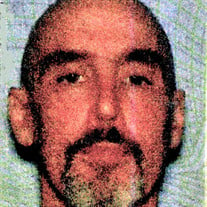 Mark Randle Rucker, 58, of Elberton, passed away peacefully on Tuesday, April 16, 2019 after a courageous year-long battle with cancer. He departed surrounded by loving family and friends. Mark was born on July 16, 1960 in Oneonta, Alabama. He was the son of Carolyn Nance Rucker of Elberton; his biological father, the late James Ray Hughes and his stepmother, Frankie Hughes; and his adoptive father, the late Guy W Rucker, Jr. He was also predeceased by a brother, Tony Ray Hughes. Mark trained as a machinist at Athens Tech and served as a machinist mate on the USS Yellowstone in the US Navy, receiving an honorable discharge. A jack-of-all trades and self-educated Renaissance man, Mark had a thirst for knowledge, a wide range of interests and a curious mind. He never met a musical instrument he couldn’t play, taught himself to play the guitar at the age of 11, and could play any song by ear after hearing it once. He loved reading about quantum and geometric physics and taught himself to build and program computers and design websites. In addition, he was an amateur religious scholar, a gourmet chef, and a volunteer fireman. He was a comedian from an early age and had an infectious smile and laugh. He also spent years as a loving caregiver to his adoptive father. Mark never met a stranger and welcomed everyone he encountered. Mark meant the world to his family and there will always be a void from the loss of his kind and beautiful soul. He was the loving husband of Rita Saxon Rucker for 35 1/2 years. In addition to his wife and mother, Mark is survived by his two children, Carie Anne Dale of Elberton and Matthew Randle Rucker of Bowman; a daughter-in-law, Tiffany Rucker of Bowman; a son-in-law, Joel Dale of Elberton; grandchildren Kylee, Kendall, David Hezekiah, Samuel and Marcus; sisters Pamela Lilith of Lancaster, Pennsylvania, Lynda Rucker of Berlin, Germany and Tammy Hughes Lee of Birmingham, Alabama; brothers Gregory Rucker of Glendale, Arizona and Randy Hughes of Birmingham, Alabama; mother and father-in-law Joyce and Norman Grimes, sister-in-law Patti Norman, brothers-in-law Doug Norman and Marty Saxon, all of Elberton; and many nieces and nephews. Contributions can be made in Mark's name to the TJ and Friends Foundation, P.O. Box 6161, Elberton, GA 30635, or to the American Cancer Society, 105 Westpark Drive, Suite C, Athens, GA 30606. Arrangements for Mr. Mark Randle Rucker were in the care of Hicks Funeral Home & Cremation Services of Elberton.

Mark Randle Rucker, 58, of Elberton, passed away peacefully on Tuesday, April 16, 2019 after a courageous year-long battle with cancer. He departed surrounded by loving family and friends. Mark was born on July 16, 1960 in Oneonta, Alabama.... View Obituary & Service Information

The family of Mr. Mark Randle Rucker created this Life Tributes page to make it easy to share your memories.

Mark Randle Rucker, 58, of Elberton, passed away peacefully on...

Send flowers to the Rucker family.