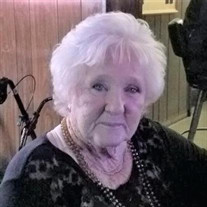 Mrs. Marilyn Joy Williams Booth, 81, of Elberton, passed away Monday, December 2, 2019 at Elbert Memorial Hospital. A native of New Orleans, Louisiana, she was the daughter of the late Roy F. and Helen Chanoby Williams. She was the widow of... View Obituary & Service Information

The family of Mrs. Marilyn Williams Booth created this Life Tributes page to make it easy to share your memories.

Send flowers to the Booth family.