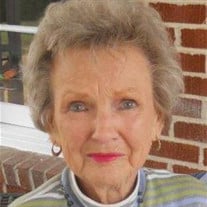 Margaret Ann Algood “Polly” Pitts, daughter of the late Hoyt and Jewell Algood of Elberton, Georgia, died peacefully at home surrounded by her family, on April 29, 2015. Polly was born on February 13, 1933 in Elbert County, Georgia and she married Bobby Lee Pitts in June of 1949. In their nearly 66 years of marriage they only spent a handful of days apart. In fact, in the last few years they moved their chairs closer and closer together so that they could hold hands as much as possible. Polly was always thankful that she was able to have the life she had always wanted, that of being a mother to five children and grandmother to many grandchildren and great-grandchildren. She was a long-time member of Flowery Branch Baptist Church. She and Bobby became members of Elberton Christian Church after moving back to her childhood home in Elberton. Besides her parents, Polly was preceded in death by her son, Dennis Pitts, her brother, Milford Algood, and her great-grandson, Parker Cash. Polly is survived by her husband, Bobby Lee Pitts of Elberton; son, Mike (Michelle) Pitts of Flowery Branch; daughter, Debbie (Ted) Hansford of Stephens, GA; son, Robby (Patti) Pitts of Carrollton, GA; daughter, Lisa Teague of Flowery Branch; brother, Curtis (Sandra) Algood and sister-in-law, Patricia Algood, all of Elberton. She is also survived by 23 grandchildren and 12 great-grandchildren. Services were held at Hicks Funeral Home in Elberton, Georgia, on Saturday, May 2, 2015 at 3 pm with visitation at 2 pm. Officiants were Pastor Paul Wade, her long-time pastor from Flowery Branch Baptist Church and the Reverend Jay Akin, pastor of Elberton Christian Church. Her grandchildren served as pallbearers. In lieu of flowers, donations may be made to the Elberton Christian Church, 1128 Calhoun Falls Hwy., Elberton GA 30635. Online condolences may be expressed to the family at www.hicksfuneral.com. Hicks Funeral Home was honored to care for the family of Mrs. Margaret Algood “Polly” Pitts.

The family of Mrs. Margaret Algood "Polly" Pitts created this Life Tributes page to make it easy to share your memories.