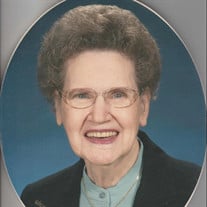 Mrs. Lucille Turner Ouzts of Elberton, age 98, passed away peacefully on June 4 at Elbert Memorial Hospital. Mrs. Ouzts was born September 12, 1921 in Hazard, Kentucky, daughter of the late John Calvin Turner and Rose Lillie Graham Turner. She received a Nursing degree from Berea College and upon graduation joined the U.S. Army as a Nurse Lieutenant during World War II. After the war she continued her nursing education at Vanderbilt University. While working as a public health nurse in Chattanooga, Tennessee she met her future husband, J. Lewis Ouzts, at a veterans’ dance. They were married in October of 1951 in Elizabethtown, Kentucky. Mrs. Ouzts was most proud of her work for the School Board of Elbert County teaching the Licensed Practical Nurse course for a number of years. Many of her students are still working in the nursing profession in Elbert County. She was an active member of Elberton First Presbyterian Church for over 50 years serving as Deacon, Elder, and President of the Women of the Church. After her retirement Mrs. Ouzts enjoyed traveling all over the world with her Elberton friends and visiting her children and grandchildren. She was an avid reader and as always, devoted many hours to church activities and volunteer work. In addition to her husband and parents she was predeceased by her brothers, Paul, Horace, Hubert, and Lloyd Turner. Survivors include her two daughters, Nancy O. Reynolds (Bob) of Elberton, Carol O. Cordray (Jim Reaves) of Atlanta; grandchildren Katherine R. Loichinger (Corey) of Charleston, SC., J. Turner Reynolds of Greenville, SC (Linett), and Arielle Konfino Cohen (Jason) of Dallas, TX; and great grandchildren Fletcher, Thaddeus, Heyward, and Siddalee Loichinger. A memorial service to celebrate Mrs. Ouzts’ life will be scheduled at a later date. Interment will be at Friendship Church Cemetery in Saluda County, SC. Contributions in her memory may be made to Elberton First Presbyterian Church, P.O. Box 185, Elberton, GA 30635. Mrs. Ouzts family is grateful to the staff and caregivers at both Magnolia Estates and Nancy Hart Nursing Home for their friendship and care over the last 4 years. Arrangements for Mrs. Lucille Ouzts were in the care of Hicks Funeral Home & Cremation Services.

The family of Mrs. Lucille Turner Ouzts created this Life Tributes page to make it easy to share your memories.

Send flowers to the Ouzts family.