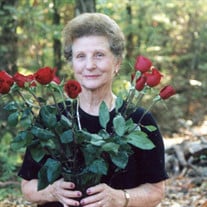 Mrs. Louise Taylor Bratton died peacefully at home on Sunday, February 28, 2016 at the age of 90. Mrs. Bratton was born on September 22,1925 in Senatobia, Mississippi to James Edgar (Pop) and Jimmie Lewers Taylor. She was the widow of Charles M. Bratton. Mrs. Bratton graduated from Northwest Mississippi Junior College. After their marriage, she and her husband moved to Washington, DC where he was an FBI agent, and she worked briefly as a clerk in the FBI office. After that, she devoted her time to her home and family. Louise and Charlie moved from Nashville, Tennessee to Elberton in 1986 and became active members of this community. Mrs. Bratton was a member of the EMH Auxiliary, the Life Enrichment Program, Red Hats, the 1925 Girls, and Elberton Church of Christ. She and her husband were avid gardeners and loved to share their bounty of vegetables with friends and neighbors. She was a voracious reader, often reading a book a day. She also was very competitive in playing games of Rummikub, Scrabble, Mexican Train Dominoes, and Canasta with her family, friends, and sitters. Mrs. Bratton is survived by her daughter and son-in-law, Karen and Bob Hardy Elberton, her son, Charles M. Bratton, Jr. of Nashville, three grandchildren, Elizabeth Hardy Head and her husband Hugh of Atlanta, Robert Hardy and his wife Chrissy of Winston-Salem, NC, Natalie Bratton Allison and her husband Joel of Nashville; and four great granddaughters and one great grandson due in April. She is also survived by one brother, Clayton Taylor, of Palm Springs, CA. A service to celebrate Mrs. Bratton’s life was held on Thursday, March 3, 2016 at 2:00 p.m. in the sanctuary of Elberton First Baptist Church. A time of fellowship for friends and family was held before the service beginning at 1:00 p.m. in the Fellowship Hall. Rev. Raymond Scott officiated, and burial followed at Forest Hills Memorial Park. Because of her great love of reading, the family requests that in lieu of flowers, donations be made to the Elbert County Library, 345 Heard Street, Elberton, GA 30635. Arrangements for Mrs. Louise T. Bratton were in the care of Hicks Funeral Home & Cremation Services of Elberton.

Mrs. Louise Taylor Bratton died peacefully at home on Sunday, February 28, 2016 at the age of 90. Mrs. Bratton was born on September 22,1925 in Senatobia, Mississippi to James Edgar (Pop) and Jimmie Lewers Taylor. She was the widow of Charles... View Obituary & Service Information

The family of Mrs. Louise T Bratton created this Life Tributes page to make it easy to share your memories.

Send flowers to the Bratton family.