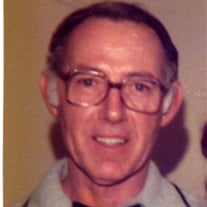 Mr. Louis M. Cobo, 90, of Elberton, Georgia passed away Saturday, August 9, 2014 at Spring Valley Healthcare Center. Mr. Cobo was born in Piqua, Ohio to the late Miguel and Sara Canales Cobo, however, the family soon moved and Louis grew up in “Sweet City” in Elbert County. He had celebrated over 68 years of marriage with his bride, Jimmie Magill Cobo. Mr. Cobo honorably served his country in the United States Marine Corps, and was a veteran of World War II, serving in the South Pacific. He returned home to work as an electrician until his retirement. Louis was an avid golfer, and was most proud of his accomplishment of achieving a hole-in-one twice in his lifetime. He also enjoyed fishing as a pastime In addition to his wife, Jimmie Magill Cobo, Mr. Cobo is also survived by his daughter, Evita Cobo Smith and her husband, Greg, of Bennington, Vermont; his son, Mike Cobo and his wife, Kelly, of Alpharetta; and one grandchild, Benjamin McCombs of Alpharetta. He also leaves behind two brothers: Richard Cobo of Newnan, and Max Cobo of Elberton; and several nieces and nephews. Mr. Cobo was preceded in death by a brother, Mitchell Cobo, and a sister, Nita Cobo Webb. A memorial service was held Thursday, August 14, 2014 at 2:00 p.m. in The Chapel of Hicks Funeral Home, Elberton, with Rev. Gary Purvis officiating. A time of visitation for family and friends was Wednesday evening, August 13, 2014 from 6:00-8:00 p.m. at Hicks Funeral Home. Inurnment followed at Elmhurst Cemetery with military honors. Memorials may be made to the Organ Fund of First Baptist Church, Elberton, at 132 Heard St., Elberton, GA 30635. The family will be at the home at 406 Ridgecrest Drive. You may express condolences to the family online at www.hicksfuneral.com. Hicks Funeral Home of Elberton was honored to care for the family of Mr. Louis M. Cobo.

The family of Mr. Louis M. Cobo created this Life Tributes page to make it easy to share your memories.

Send flowers to the Cobo family.