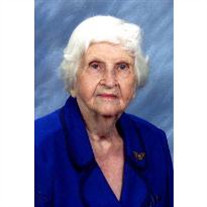 Lois Truman Mckissick Jones of Elberton, Ga. died Saturday, September 10, 2011 at the age of 1071/2. Lois was born on January 5, 1904 to the late Dr. Joseph Franklin and Roxie Baker Mckissick in Farmersville, Texas. Her husband, John Henry Jones, a sister Ouida Norris, a brother Auburn Mckissick and a son Joseph Franklin Jones preceded her in death. Her life is celebrated by her son William O. Jones and wife Juanita of Kiawah Island, SC., a daughter in law, Nancy Jones of Atlanta, Ga., two grandchildren, Elizabeth Clossin of Chattanooga, TN, Cody Jones of Charleston, SC., and two great grandchildren, Patrick Clossin who is in school at Washington and Lee and Jessica Jones who is in law school at the University of VA. Lois grew up in Arlington, Texas and graduated from Baylor University. She then studied at the Aunspaugh Art Institute in Dallas, Texas. After school Lois moved to California to work as an artist for Walt Disney. While in California she married John H. Jones. In 1938 the family moved to Elberton, Ga., John Henry’s home. Lois continued to paint, specializing in water colors. She as an active member of the First United Methodist Church, the Lena Childs Sunday School class and a work volunteer. She was a Pink Lady and a Red Cross volunteer. Lois also was active with the Little Theater group. A celebration of Lois’s life will be held Saturday, September 17, 2011, at 11 a.m. at the First United Methodist Church, Elberton with the Reverend Wayne Smith officiating. Visitation will be held from 10:30 am to 11:00 am prior to the funeral. In lieu of flowers, memorials may be made to the First United Methodist Church. Online condolences may be expressed to the family at www.hicksfuneral.com. Hicks Funeral Home is honored to be serving the family of Lois Truman Mckissick Jones.

The family of Lois Mckissick Jones created this Life Tributes page to make it easy to share your memories.