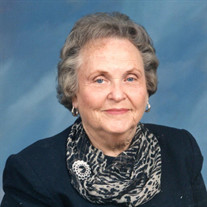 Mrs. Leona Fleming Dye, 95, passed away Saturday, March 10, 2018 at Pruitt Healthcare, Spring Valley. A native of Elberton, Mrs. Dye was the daughter of the late Jim H. Fleming, Jr. and the late Orie Lee Childs Fleming. Her husband, Bronson Ward “Bunk” Dye, preceded her in death in 1985, after 43 years of marriage and her son, Michael Ward Dye also preceded her in death in 2013. Mrs. Dye was also predeceased by three sisters, Ethel Thomasson, Alma Powell, Zelma Vaughn and one brother, Allen Fleming. Mrs. Dye was a homemaker and Seamstress having worked in Dye’s Trim Shop which she and her husband owned. After they sold the shop, she continued to work there, not only as seamstress and designer but also did the bookkeeping. She also worked as a hairdresser. Mrs. Dye was a member of First United Methodist Church of Elberton and the Manning Co-ed Sunday School Class. She was always actively involved in the community, especially cub scouts and school activities. She was a devoted wife and mother and was crazy about her boys, her grandchildren and great grandchildren. She enjoyed and loved life. She especially enjoyed visits from family and extended family. Funeral services were held on Monday, March 12th at 11:00 a.m. in the Chapel of Hicks Funeral Home and Cremation Services with Rev. Jim McCullough officiating. Jim Boyd, Derek Dye, Dr. Don Dye, Chris Dye, Ryan Markus, and Brock Boyd served as pallbearers. Interment followed in Forest Hills Memorial Park. A time of visitation began at 10:00 a.m. just prior to the service. Survivors include one son and daughters-in-law, F. Kent and Katrina Dye of Elberton, and Sandra Jane Dye of Marietta; two granddaughters and their husbands: Lindsay and Ryan Markus, and Allison and Adam Graves; and five great-grandchildren: Bryson and Bella Markus, Morgan, and Madison and Michael Graves. In lieu of flowers, memorial contributions may be made to the Elberton First United Methodist Church or the charity of one’s choice.

The family of Mrs. Leona Fleming Dye created this Life Tributes page to make it easy to share your memories.

Send flowers to the Dye family.