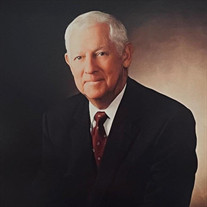 Mr. Lawson Jackson McConnell, Sr., beloved husband of the late Patricia Elizabeth Winn McConnell, passed away Saturday, January 15, 2022 at his residence while he was surrounded by his loving family. In lieu of flowers, memorials may be directed to Elberton First United Methodist Church, P.O. Box 398, Elberton, Georgia 30635; or to the Elbert Memorial Hospital Foundation, 4 Medical Drive, Elberton, Georgia 30635. Jack was born February 10, 1937 in Royston, Georgia. He was the son of the late Turner Lawson Mcconnell and Laura McWhorter McConnell. He was preceded in death by his wife, Patricia in 2016. He is survived by his daughter Kathleen Laura Korotzer and son in law Gary Korotzer of Orinda, California; grandchildren Turner Joshua Korotzer and Nicholas Carroll Korotzer; son Lawson Jackson McConnell, Jr. and daughter-in-law Jenny Brown McConnell; grandchildren Lawson Chandler McConnell and Mary Margaret McConnell; sister, Alice McConnell Eberhardt of Spartanburg, South Carolina; brother in law, Thomas Wayne Winn and wife Margaret of Estero, Florida; nieces and nephews, Dr. Linton W. Eberhardt, IV of Atlanta, niece Laura Eberhardt Stille of Spartanburg, South Carolina, Mary Winn Fons of Holly, Michigan, and nephew Bob Winn of Denver, Colorado. Jack attended public schools in Royston, Georgia where he played baseball and football for Royston High School. He graduated from the Georgia Institute of Technology in 1959 with a bachelor of science in industrial management and where he was in the U.S. Navy ROTC program. After graduation, Jack was commissioned as an Ensign in the U.S. Naval Reserve and served for two years in San Diego, CA and aboard the USS George Clymer (APA 27) in Japan. In September 1961, Jack married Patricia, the love of his life and they settled in Elberton, Georgia. He was a member of the Elberton First United Methodist Church where he was a member of the Mary Freeman Sunday School Class. Over the course of five decades, Jack built a banking career at First National Bank of Elberton, the predecessor to Pinnacle Bank where his professional career ended with his retirement as Chairman in 2007. Retirement allowed Jack the time to devote to his lifelong passions of fishing for largemouth bass, hunting for wild turkey and deer, farming trees and enjoying the outdoors. During his six decades in Elberton, Jack served the community in many capacities including as Chairman of the Development Authority of Elberton, Elbert County and Bowman, past-Chair of the Elbert County Chamber of Commerce, past-President of the Rotary Club of Elberton, and other leadership positions with the Elberton Housing Authority, the Jaycees, Georgia Bankers Association, various church committees and the Samuel Elbert Chapter of the Sons of the American Revolution. With Patricia, Jack enjoyed traveling around the United States and other destinations worldwide, with special love for their time at Clarks Hill Lake and Cashiers, North Carolina. Jack was known for his dedication and love of family, his friendship to all he met, his wit and humor, his generosity and warm spirit. Jack was good company and a rascal. A celebration of Jack's life was held at 1:00 P.M. Wednesday, January 19, 2022 at Elberton First United Methodist Church with Jack's friend and pastor, Reverend Jim McCollough, officiating. The family received friends one hour prior to the service. Following the service, the family gathered for a private interment service at Elmhurst Cemetery. Arrangements for Mr. Lawson Jackson McConnell, Sr. were in the care of Hicks Funeral Home & Cremation Services of Elberton.

Mr. Lawson Jackson McConnell, Sr., beloved husband of the late Patricia Elizabeth Winn McConnell, passed away Saturday, January 15, 2022 at his residence while he was surrounded by his loving family. In lieu of flowers, memorials may be directed... View Obituary & Service Information

The family of Lawson Jackson McConnell Sr. created this Life Tributes page to make it easy to share your memories.

Send flowers to the McConnell family.