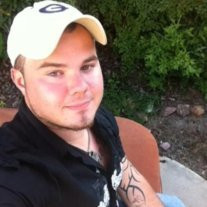 Mr. Harley “Kane” Thomason of Bowman, Georgia was taken away Wednesday afternoon, October 9, 2013 at the age of 24. Kane was the son of Jimbo and Shan Thomason of Bowman. Kane was a 2007 graduate of Elbert County Comprehensive High School, and was honored to play the drums in the ECCHS Marching Band since he was in the 8th grade. Kane graduated from WYOTECH in Daytona Beach, Florida in June of 2013 with a degree in Marine Mechanics. He was recently employed by Jennings Mill County Club Golf Course as their Equipment Manager. Kane’s life was special from the beginning, as he arrived on July 4th, 1989. His passion for music led him to touch so many lives in so many ways, especially with his “spur of the moment” solos. Kane walked to the beat of a different drum, and if you ever met Kane, you never forgot him. In addition to his parents, Kane is survived by a sister, Brandi Johnson Parham and her husband, Alan; one nephew, Levi Parham; and a niece, Lyndsey Parham, all of Royston. He is also survived by his maternal grandmother, Frances Dye, and grandfather, Marvin Dye, of Elberton; and his paternal grandmother, Mary Jane Sams of Fayetteville, and grandfather, Harley Lee Thomason of Bowman. Kane would request a celebration of his life, rather than the mourning of his death. A time of visitation for family and friends was held on Sunday evening, October 13, 2013 at Hicks Funeral Home from 6:00-9:00 p.m. The celebration was on Monday morning, October 14, 2013 at 11:00 a.m. at Bowman Baptist Church with Rev. Billy Owensby officiating. Interment followed at Hillcrest Cemetery in Bowman. The family is at the home at 440 Rehoboth Road, Bowman, GA. You may express condolences to the family at www.hicksfuneral.com. Arrangements for Mr. Harley “Kane” Thomason were in the care of Hicks Funeral Home of Elberton.

Mr. Harley &#8220;Kane&#8221; Thomason of Bowman, Georgia was taken away Wednesday afternoon, October 9, 2013 at the age of 24. Kane was the son of Jimbo and Shan Thomason of Bowman. Kane was a 2007 graduate of Elbert County Comprehensive... View Obituary & Service Information

The family of Mr. Kane Thomason created this Life Tributes page to make it easy to share your memories.

Mr. Harley “Kane” Thomason of Bowman, Georgia was taken away...

Send flowers to the Thomason family.