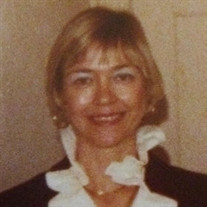 Mrs. Jolyn Hunt Abbott, 74, a native of Elberton, Georgia, died in the Palm Springs Memorial Hospital in Hialeah, FL, on June 10, 2015, after an extended illness. She was extremely proud of her two sons, John Reeves Abbott (father – the late Jack Wayne Reeves J.D.) and Michael Anthony Abbott [father -- Col. (Ret.) George Gregory Abbott D.D.S.], their wives Leia Matykiewicz-Abbott (John) and Zascha Blanco Abbott J.D. (Michael) and her granddaughter (John’s child) Courtney Eve Abbott. She was so pleased to spend her last years with them in Coral Gables, FL. Mrs. Abbott was the oldest daughter of the late Joel and Billie Hunt. She attended the Elbert County schools, was an honor student and a beauty pageant winner. She achieved the Curved Bar, highest rank in Girl Scouting at that time. Mrs. Abbott was also a first Queen in the Girls’ Auxiliary at the Elberton First Baptist Church. She finished high school at Emory at Oxford (Covington, GA). She also attained an Associate Degree in Interior Decorating from St. Mary’s University (San Antonio, TX) and a Bachelor of Science Degree with a double major in Psychology and Sociology from Huntingdon College (Montgomery, AL). While married to Col. Abbott, she and her family traveled all over the world and resided in Newfoundland, Germany, the Philippines, Texas, Mississippi, Florida, and Georgia. Mrs. Abbott was a fantastic conversationalist, marvelous decorator, avid antique collector, and excellent cook. Born on Easter Sunday in 1941, she enthusiastically incorporated many special holiday traditions into her family’s life, with her favorite being Christmas. She featured her row house home (built in Savannah, GA in 1852) for several years during the Savannah Holiday Tour of Homes. Active in civic activities, she was a member of the Daughters of the American Revolution, Kiwanis International, and local garden clubs. Survivors include her sons John (Leia) Abbott, Michael (Zascha) Abbott, and granddaughter Courtney Abbott, all of Coral Gables, FL. Other survivors include her sister Cheryl Hunt Clements Ph.D. (Bill) of Kennesaw, GA and first cousins throughout the southeast. A memorial service was conducted at 3 p.m., June 29, 2015, at the Elberton First Baptist Church, with the Rev. Gary Purvis officiating. A reception for family and friends followed the service in the church fellowship hall. In lieu of flowers, a donation may be given to the Melanoma Research Alliance, the American Cancer Society, or any charity of choice. Hicks Funeral Home & Cremation Services was in charge of arrangements.

Mrs. Jolyn Hunt Abbott, 74, a native of Elberton, Georgia, died in the Palm Springs Memorial Hospital in Hialeah, FL, on June 10, 2015, after an extended illness. She was extremely proud of her two sons, John Reeves Abbott (father &#8211; the... View Obituary & Service Information

The family of Mrs. Jolyn Hunt Abbott created this Life Tributes page to make it easy to share your memories.

Send flowers to the Abbott family.