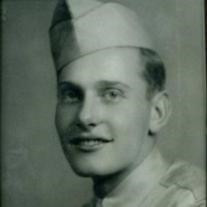 Mr. John C. Peppers, 87, lifelong resident of the Fortsonia community, Elberton, GA, passed away Saturday, May 26, 2012 at Elbert Memorial Hospital. Mr. Peppers was born Dec. 9, 1924 to the late Claude S. and Effie Peppers. He was preceded in death by his precious wife of 56 years, Eloise Smith Peppers. Mr. Peppers was a U.S. Army Air Corps veteran, having served in World War II. He was a retired poultry farmer and enjoyed fishing as well. He was a devoted member of Eliam Methodist Church. Mr. Peppers dearly loved his family and was loved by each of them. Mr. Peppers is survived by his daughter and son-in-law, Jane Peppers Carter and Dale Carter of Advance, NC; daughter-in-law, Kay Peppers of Elberton, GA; five grandchildren and nine great-grandchildren. He also leaves behind sisters-in-law Jewell Peppers and Martha Cornell, both of Elberton. In addition to his parents and wife, Mr. Peppers was preceded in death by his son, Steve Peppers; a great-grandson, Steven Ray Carter; a sister, Doris Carithers; and a brother, Melvin Peppers. A service to celebrate Mr. Peppers’ life will be Monday, May 28, 2012 at 11:00 a.m. at The Chapel of Hicks Funeral Home with Rev. Kenneth Deitle officiating . Visitation will be Monday at 10:00 a.m. just prior to the service. Interment will be at Forest Hills Memorial Park. In lieu of flowers, the family requests that donations in Mr. Peppers’ memory be made to Eliam Methodist Church, 2130 Dr. George Ward Rd, Elberton, GA 30635, or The National Kidney Foundation at 30 East 33rd St., New York, NY 10016. Online condolences may be expressed to the family at www.hicksfuneral.com. Hicks Funeral Home is honored to be serving the family of Mr. John C. Peppers.

The family of Mr. John Peppers created this Life Tributes page to make it easy to share your memories.

Send flowers to the Peppers family.