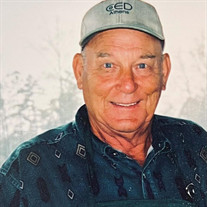 Mr. John Marvin “Bud” Moon went to be with the Lord on Saturday January 1st, 2022. He passed peacefully at home surrounded by his wife of 65 years and loving family. Bud was born on January 3, 1935, to the late Edwin Moon and Rachel McCannon Moon. He was a faithful member of Burts United Methodist Church in Carlton, Ga. Bud had many jobs throughout his life with the majority of his career spent working at textile mills such as Chicopee Manufacturing Company. He retired from Athens Regional Medical Center in 2000 where he worked in the engineering department. After retirement, Bud enjoyed doting on his family, making new friends, or spending time outside tinkering on his farm, or tending to his cows. Bud was known far and wide for his ability to make friends with anyone. Whenever possible, he imparted the wisdom that it “don’t cost nothing to speak.” In addition to his parents, he was preceded in death by his sister, Patricia Roberts. Bud is survived by his wife of 65 years, Evelyene Moon, his children Sheila Hill, Debra Armour (Lyn), Brenda Mattox (Vance), and sisters Viola Allgood and Sara Moss. He was loved and adored as Pop and Papa by his grandchildren John Armour (Katie), Paige Murphy (Andy), Mitchell Davis (Cynthia Greer), Casey Fleming (Jarrett), Jessie Rice (Alex), Jeremy Hill (Sydney Young), Peyton Mattox (Eliana Burkhalter) and by his great-grandchildren Mason Armour, Maddie Armour, JD Armour, Maddox Bradberry, Hudson Bradberry, Tripp Fleming, and Olivia Greer. Bud is also survived by a host of nieces and nephews. Last but certainly not least are his beloved four-legged companions Lady the dog and Sassy the cat. A celebration of Bud’s life was held at Burts United Methodist Church on Monday January 3, 2022. Visitation began at 1:00 p.m. and funeral services followed at 3 p.m.. He was laid to rest in the church cemetery. Pastor Anne Hanson of Burts United Methodist Church was the officiant. Pallbearers were John Armour, Mitch Davis, Jeremy Hill, Peyton Mattox, Lyn Armour, and Vance Mattox. The family requested that memorial contributions be directed to either the Burts United Methodist Church or to the church’s cemetery fund, P.O Box 494 Lexington, GA 30648. Arrangements for Mr. John M. “Bud” Moon were in the care of Hicks Funeral Home & Cremation Services of Elberton, Ga.

The family of Mr. John M. "Bud" Moon created this Life Tributes page to make it easy to share your memories.

Mr. John Marvin “Bud” Moon went to be with the Lord on Saturday...

Send flowers to the Moon family.