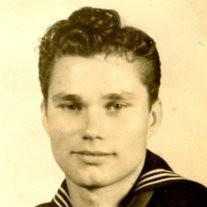 Mr. James “Jimmy” Vernon Hall, 86, of Elberton, Georgia passed away Friday, January 3, 2014 at Elbert Memorial Hospital. Mr. Hall was the son of the late Joel Spurgeon and Nannie Martin Hall. He celebrated over 62 years of marriage with his wife, Bobbie Sue McMullan Hall. Mr. Hall was a veteran, having served in the United States Navy, and was retired from the granite industry. He was a member of First Baptist Church, Elberton. In addition to his wife, Bobbie Sue, Jimmy is survived by two daughters: Gail Hall Grimes and her husband, Gene, of McDonough, and Judy Hall of Elberton; grandchildren: Chris Grimes, Marc Grimes, Lauren Ross, Carey-Lynn McIlvaine, and James Hall; and 15 great-grandchildren. He also leaves behind one sister-in-law, Jane Hall, of Knoxville, TN. Mr. Hall was preceded in death by a brother, Donald M. Hall, and two sisters, Joel Norman and Sara Ann Alewine. A service to celebrate Mr. Hall’s life was on Monday, January 6, 2014 at 3:00 p.m. at First Baptist Church, Elberton with Rev. Raymond Scott and Rev. Gary Purvis officiating. A time of visitation was at 2:00 p.m. in The Fellowship Hall just prior to the service. Memorial donations may be made to First Baptist Church, Elberton. You may leave the family condolences online at www.hicksfuneral.com. Hicks Funeral Home is honored to be serving the family of Mr. James “Jimmy” Hall.

The family of Mr. Jimmy V. Hall created this Life Tributes page to make it easy to share your memories.

Send flowers to the Hall family.