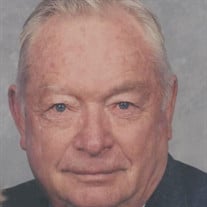 Mr. Jimmy B. Butler, 85, of Dewy Rose, Georgia passed away Sunday, October 2, 2016 at St. Mary’s Hospice House. Mr. Butler was born in Elbert County to the late Joseph and Hilda Vickery Butler. He was married to Frances Dudley Butler, and would have celebrated 57 years of marriage later this month. Mr. Butler was a veteran of the United States Navy, having served during the Korean Conflict. He was retired from the United States Postal Service as a rural mail carrier. Mr. Butler was a member of Antioch Baptist Church where he served as a deacon and as Chairman of the Deacons in the past. In addition to his wife, Frances, Mr. Butler is survived by a son, Ivan Butler (Tara) of Dewy Rose; a daughter, Sherri Butler (Joey Goldberger) of Decatur; and a granddaughter, Whitney Jean Butler of Decatur. He also leaves behind a cousin, Mary Rae Glasco Simpson of Columbia, SC; a brother, Byron Butler (Sylvia) of Dewy Rose; and numerous nieces and nephews. A service to celebrate Mr. Butler’s life was held on Tuesday, October 4, 2016 at 3:00 p.m. in the Chapel of Hicks Funeral Home with Rev. Kenny Martin and Rev. Connie Ivester officiating. A time of visitation began at 2:00 p.m. just prior to the service. Interment followed in Antioch Baptist Church Cemetery, with Dean Butler, Mark Cartledge, Joe Dudley, Terry Finch, Dayton Kurtz, and Eric Segars serving as pallbearers. In lieu of flowers, memorials may be made to the Antioch Baptist Church Building Fund at 2479 Antioch Church Rd., Dewy Rose, GA 30634, or T.J. & Friends Foundation at P.O. Box 6161, Elberton, GA 30635. Arrangements for Mr. Jimmy B. Butler were in the care of Hicks Funeral Home & Cremation Services of Elberton.

The family of Mr. Jimmy B. Butler created this Life Tributes page to make it easy to share your memories.

Send flowers to the Butler family.