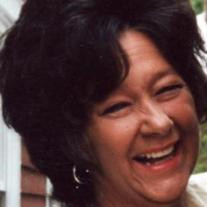 Mrs. Jenny Carol Rice Hudson, 68, of the Fortsonia Community, entered into rest Tuesday, July 24, 2012 at Athens Regional Medical Center. Mrs. Hudson was born in Elberton to the late Nelta and Dewy Rice. Mrs. Hudson is survived by her husband of 40 years, David Hudson; children: Kathrina Hudson of Elberton, Tina H. Allen and her husband, Matt, of Jacksonville, FL, and Davey Hudson and his wife, Tina, of Elberton. She also leaves behind grandchildren: Chloey Davis, Hudson Allen, Vivian Allen and Kendall Hudson; and one brother, Rev. Jim Rice and his wife, Anita, of Shelby, NC. Jenny was a wonderful mother to her three children, but she took it a step further. She was also a mother to all the children that passed through her home. Jenny was a doting grandmother, and will be missed so much by her precious grandchildren to whom she was lovingly known as “MiMi.” A service to celebrate Jenny’s life was held Friday, July 27, 2012 at 11:00 a.m. at Fortsonia Baptist Church, with Rev. Al Butler officiating. Interment followed at Fortsonia Community Cemetery. Visitation for family and friends was held at Hicks Funeral Home on Thursday, July 26, 2012 from 6:00-8:00 p.m. Hicks Funeral Home is honored to be serving the family of Mrs. Jenny Carol Rice Hudson.

The family of Mrs. Jenny Carol Rice Hudson created this Life Tributes page to make it easy to share your memories.

Send flowers to the Hudson family.