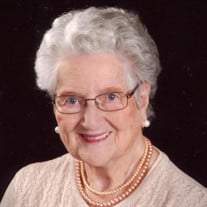 Mrs. Margaret Eugenia “Jeane” Clinkscales Phelps, age 92, departed this life on February 9, 2021 in Elberton, Georgia. Born at home on November 25, 1928, she was the only child of Ralph Clinkscales and Daisy Smith Clinkscales. A life-long resident of Elberton, she was preceded in death by her husband of 64 years, Crayton Phelps, her parents, and son-in-law, Sandy Hover. She is survived by her son and daughter-in-law, Chris Phelps and Pamelia Jo, and her daughter, Kim Phelps Hover. “Mama Jeane” is also survived by her grandchildren, Wesley Phelps (Meredith), Jeana Phelps Henderson (Matt), Heath Hover (Ashley) and Haley Hover Hymer (Gregory); and by her great-grandchildren, Nolan Henderson, Logan Phelps, Chloe Henderson, Sadie Phelps, and Brooks Hover. She was employed by the Granite City Bank (now Regions Bank) from the age of 16 until her retirement at the age of 68. A life-long member of Elberton First United Methodist Church, she was a charter member of the Manning Coed Sunday School Class and taught Sunday School in the elementary department for over 30 years. She also served as a Methodist Youth Fellowship Counselor. Upon her retirement she served as Church Treasurer in a voluntary capacity for several years. During her lifetime she was active in Beta Sigma Phi Sorority, the Iris Garden Club, the Home Demonstration Club, the Elbert County Little League Auxiliary, and Camp Harmony Association. She will always be remembered for her peanut butter fudge and party mix which she so generously delivered to friends, and strangers. She enjoyed knitting and took great pride that she had knitted a baby blanket for each of her grandchildren and great grandchildren. In her later years she was able to return to her love of bridge and so enjoyed her bridge club. In 1975 she and her husband began a new adventure, Western Square Dancing, and were charter members of the Granite Squares. They square danced all over the State of Georgia and in over 30 other states. For the past three years she resided at Magnolia Estates and her family will always be grateful for the care and love she received while a resident there. The family further wishes to express their sincere gratitude to the Medical Center, and particularly to Dr. Glenn Poon and Dr. Mark Daniel, and to the staff and nurses at Elbert Memorial Hospital, for their professional care, compassion and kindness. It is said that death is not about a life ending but of a life lived. Nothing could better describe the life of Jeane/Mama Jeane Phelps. Due to the continuing COVID-19 pandemic and existing protocols, there was no formal visitation. Those wishing to pay their respects and sign the guest book were able to do so at Hicks Funeral Home on Thursday, February 11th and on Friday, February 12th. A private family funeral service was conducted on Saturday, February 13, 2021 with Rev. Jim McCollough officiating. Interment followed in Elmhurst Cemetery. Memorial contributions may be made to the Building Fund of the Elberton First United Methodist Church; P.O. Box 398, Elberton, GA 30635. Arrangements for Mrs. Margaret Eugenia “Jeane” Clinkscales Phelps were in the care of Hicks Funeral Home & Cremation Services of Elberton.

Mrs. Margaret Eugenia &#8220;Jeane&#8221; Clinkscales Phelps, age 92, departed this life on February 9, 2021 in Elberton, Georgia. Born at home on November 25, 1928, she was the only child of Ralph Clinkscales and Daisy Smith Clinkscales.... View Obituary & Service Information

The family of Mrs. Jeane C. Phelps created this Life Tributes page to make it easy to share your memories.

Send flowers to the Phelps family.