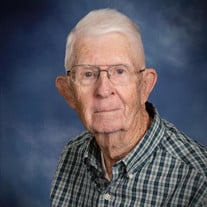 Mr. James Stuart Lyle, Sr., age 94, passed away on January 21, 2021 due to a Covid-19 related illness. He was born December 6, 1926 at 313 Heard St. in Elberton, GA to the late James Coy Lyle and Eula Stewart Lyle. Stuart was married to the love of his life, Isabel “Bunnie” Fausett Lyle, for 66 years. He was a devoted father to his children, Fran Rodrigues and husband George of Watkinsville, Jim Lyle and wife Elisa of Gulf Shores, AL. and Jeff Lyle of Elberton; and grandchildren, James Stuart Lyle III and Jared Skelton. Stuart thoroughly enjoyed reminiscing about his childhood growing up on Heard Street. An only child, he took great pleasure in playing and getting into mischief with the neighborhood children. Stuart loved spending time in the summers with his beloved Aunt Norvin at her farm near Anthony Shoals on the Broad River. It was there he developed his love for the outdoors. In his youth Stuart worked at the soda fountain at Herndon Drug Co. where his father was a pharmacist. While attending North Georgia College in Dahlonega, Stuart was drafted into the Army in 1945. He volunteered for the paratroops and was assigned to the 13th Airborne Division. The war in Europe ended while he was in basic training, but Stuart served in the Occupation Army in Japan where he was assigned to the 11th Airborne Division. Upon discharge from the Army, Stuart attended the University of Georgia and graduated in 1950. He spent his career working in sales in the granite industry. Stuart enjoyed working with youth as Scoutmaster of Troop 127 and coaching Little League. A lifelong member of the First Baptist Church, Stuart served as deacon and Sunday School teacher. He was also a member of Gideons International, Elbert County Historical Society, and a charter member of the Elbert County Chapter Sons of the American Revolution. Stuart was instrumental in getting a monument erected at Richard B. Russell State Park to commemorate the Battle of Vann’s Creek. Trips to England and Scotland resulted from Stuart’s passion for genealogy. He was proud of his Scottish ancestry. Stuart and Bunnie were quite the team when it came to researching multiple family lines. Stuart always enjoyed taking rides around his beloved Elbert County, particularly in his later years. He also delighted in taking out of town guests along for the ride. A graveside Celebration of Life service was held Tuesday, January 26 at 2:00 p.m. at the historic Elmhurst Cemetery. Mr. Lyle lay in state at Hicks Funeral Home on Monday, January 25 for those who wished to pay their respects and sign the guest book. Memorial contributions may be made to the Good Samaritan or Ramp Ministry Funds at the First Baptist Church, 132 Heard St., Elberton, GA 30635. Arrangements for Mr. James Stuart Lyle, Sr. were in the care of Hicks Funeral Home & Cremation Services of Elberton.

The family of Mr. James Stuart Lyle Sr. created this Life Tributes page to make it easy to share your memories.

Send flowers to the Lyle family.