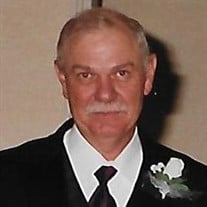 Mr. James Edward Anderson, 66, of Elberton, Georgia passed away Tuesday, July 18, 2017 at Piedmont Athens Regional Hospital. Mr. Anderson was born in Elberton to the late Kurt and Lenora Bond Anderson. He was the husband of Carolyn Davis Anderson, with whom he had celebrated 48 years of marriage. Mr. Anderson was a stonecutter in the granite industry, and had worked for both Harmony Blue and Ameristone. When he had the opportunity, he could be found at Arrowhead Pointe enjoying a game of golf. In addition to his wife, Carolyn, Mr. Anderson is survived by two sons and their wives: Chad and Sara Anderson, and Ricky and Whitney Anderson, all of Elberton. He also leaves behind several grandchildren: Riley, Melanie, and Nova Anderson, Brady Anderson. Brinston Anderson, Jace Rhein, and Bella Anderson. A service to celebrate Mr. Anderson’s life was held at 11:00 a.m. on Saturday, July 22, 2017 at Coldwater United Methodist Church, with Rev. Ann Mann officiating. Interment followed in the church cemetery with Riley Anderson, Brady Anderson, Brinston Anderson, Jace Rhein, Greg Gerlach, and Bryan Dixon serving as pallbearers. A time of visitation was held on Friday, July 21, 2017 from 6:00-8:00 p.m. at Hicks Funeral Home. Arrangements for Mr. James Edward Anderson were in the care of Hicks Funeral Home & Cremation Services of Elberton.

The family of Mr. James Edward Anderson created this Life Tributes page to make it easy to share your memories.

Send flowers to the Anderson family.