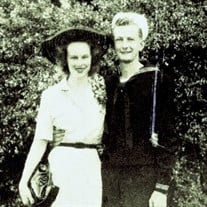 Mr. Hubert Sherrill Eddleman, 97, of Dewy Rose, Georgia, passed away peacefully on May 22, 2020, after a short illness. Hubert was married to the late Kathleen Dockins Eddleman for 73 years before her passing in 2018. Their son, Hubert Sherrill Eddleman, Jr., of Atlanta, preceded them in death. They are survived by daughters Ginger Reed (Joel) of Mars Hill, NC and Gerry Bankston (Jimmy) of Barnsville, GA. A life-long resident of Georgia, Hubert was born on April 10, 1923, in Hart County to the Rev. Henry Clay and Meanda Celesta Gaines Eddleman of Dewy Rose. He was a brother to the late Henry Clay Eddleman of Dekalb County and the late Benjamin Franklin Eddleman of Carrollton. Hubert graduated from Hartwell High School and The University of Georgia where he majored in Vocational Education and minored in Math and Science. In June 1956, he received the Master of Arts degree from Vanderbilt University’s George Peabody College for Teachers. He spent his entire career as a public-school teacher and administrator, serving as an elementary school principal in Stockbridge, Georgia. Hubert was a World War II Veteran, serving in the United States Navy from January 1943-November 1945. After training in Little Creek, Virginia, he served in both the U.S. and Honduras where his job was “giving the boys their basic training, and carried on a physical education program with them.” In 1980, Hubert retired from Chapel Hill School in Dekalb County; in 1983, the couple moved to their 50-acre farm in Dewy Rose where they enjoyed gardening, square dancing, traveling and camping. They were members of First Baptist Church, Elberton. They are also survived by six grandchildren and 13 great grandchildren and two great, great grandchildren. The grandchildren of Mr. and Mrs. Eddleman are: Melissa Tennyson Silva of Marlboro, NY; Amy Celeste Reed Saalweachter of Lewisville, NC; Jesse Clay Tennyson of Boise, ID; Mary Kathleen Reed Wyatt of Weaverville, NC; Sarah Poole of Griffin, GA; and Abigail Smith of Tampa, FL. A Memorial Service to honor Mr. Eddleman’s life will be scheduled by the family at a later date.

Mr. Hubert Sherrill Eddleman, 97, of Dewy Rose, Georgia, passed away peacefully on May 22, 2020, after a short illness. Hubert was married to the late Kathleen Dockins Eddleman for 73 years before her passing in 2018. Their son, Hubert Sherrill... View Obituary & Service Information

The family of Mr. Hubert Sherrill Eddleman created this Life Tributes page to make it easy to share your memories.

Send flowers to the Eddleman family.