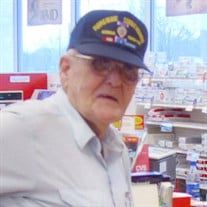 Mr. Herbert Lee Smith, known to many as “Flooky,” passed away Friday, September 25, 2015 at his home with his family by his side. Mr. Smith was born July 15, 1928 to the late Ernest and Annie Mauldin Smith. He was the beloved husband of his bride, Hazel Anderson Smith, having celebrated over 63 years together. Mr. Smith was a veteran of the United States Army, having honorably served in World War II with the Occupation Forces in the Alaskan Aleutian Islands and Okinawa, Japan. He then went on to serve our country in the Korean War, and was wounded three times, once severely. Mr. Smith received many distinguished medals and citations, including two Purple Heart Awards, Combat Infantryman Badge, a Presidential Unit Citation for his service in Korea, the Korean Service Medal with one Silver and one Bronze Service Star, the Distinguished Unit Emblem, and the Meritorious Unit Emblem. After serving six years in the U.S. Army, Mr. Smith returned to Elberton and worked for seven years for the Elberton Police Department, and then nine years for the Elbert County Sheriff’s Department. Mr. Smith then retired, due to disabilities resulting from the wounds he received during his U.S. Army service. Mr. Smith was a member of the Purple Heart Association, the Veterans of Foreign Wars, the American Legion, the Disabled Veterans Association, and the 25th Infantry Division Association. In addition to his wife, Hazel, Mr. Smith is survived by a grandson, Jeff Smith and his wife, Nikki; one great-grandson, Chase Smith; and a great-granddaughter, Scarlet Eve Smith, all of Elberton. Mr. Smith was preceded in death by a son, Mitchell Lee Smith, and a great-granddaughter, Kaylee Rose Smith. A service to celebrate Mr. Smith’s life was on Sunday, September 27, 2015 at 4:00 p.m. in The Chapel of Hicks Funeral Home, with Rev. Roland Molina and Rev. Gary Purvis officiating. Visitation for family and friends was Saturday, September 26, 2015 from 5:00-7:00 p.m. at Hicks Funeral Home. Interment followed at Forest Hills Memorial Park with Military Honors. Memorials may be made to the charity of one’s choice, and online condolences may be expressed to the family at www.hicksfuneral.com. The arrangements for Mr. Herbert “Flooky” Smith were in the care of Hicks Funeral Home & Cremation Services of Elberton.

The family of Mr Herbert Lee Smith created this Life Tributes page to make it easy to share your memories.

Mr. Herbert Lee Smith, known to many as “Flooky,” passed away...