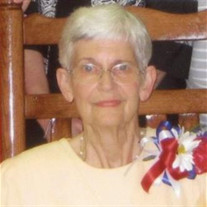 Mrs. Hazel Anderson Smith, age 80, of Elberton, Ga. passed away on Monday, August 8, 2016 at PruittHealth Spring Valley . She was born in Elberton, GA to the late Reuben & Dora Anderson. Mrs. Smith was preceded in death by her husband of 63... View Obituary & Service Information

The family of Mrs. Hazel Anderson Smith created this Life Tributes page to make it easy to share your memories.