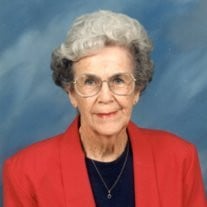 Mrs. Hattie Lou Walton Brown, 98, of Elberton, Georgia passed away Monday, June 17, 2013 at Athens Regional Medical Center. Mrs. Brown was born in Lincoln County on February 4, 1915 to the late E. Jones Walton, Jr. and Missouri Dove Turk Walton. She was the beloved wife of the late Albert Coyle Brown. Mrs. Brown worked as a sales clerk at Gallant Belk until her retirement. She was a longtime member of the First Baptist Church, Elberton, and a member of the Louree Sunday School Class. Mrs. Brown is survived by a son and his wife, Bobby and Sandra Brown, of Hartwell; a daughter and her husband, Mary Coyle and Aubrey Barden of Elberton; grandchildren: April Kirby (Cory) of Flowery Branch, GA and Robbie Brown (Jennifer) of Winston-Salem, NC; and great-grandchildren: Carlyn, Callie, Baleigh, and Brindley Kirby, Benjamin Brown, and one more great-grandchild on the way. She is also survived by a step-grandson, Stewart Barden; two step-great-grandchildren, Laken and Kanon Barden; and a special caregiver, Barbara Boleman. In addition to her husband and parents, Mrs. Brown was preceded in death by her siblings: Clanton Walton, Robert Walton, and Thelma Hammond; and a great-granddaughter, Anna Grace Brown. A service to celebrate Mrs. Brown’s life was held on Wednesday, June 19, 2013 at 11:00 a.m. at The Chapel of Hicks Funeral Home with Rev. Gary Purvis officiating. A time of visitation was at 10:00 a.m. just prior to the service. Interment followed at Elmhurst Cemetery. Memorials may be made to the charity of one’s choice. You may leave online condolences for the family at www.hicksfuneral.com. Arrangements for Mrs. Hattie Lou Brown were in the care of Hicks Funeral Home of Elberton.

The family of Mrs. Hattie Lou Brown created this Life Tributes page to make it easy to share your memories.

Send flowers to the Brown family.