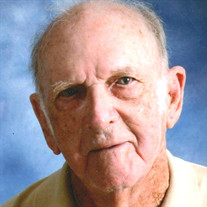 George Perry Adams passed from this life late on Monday, April 13 in Port Charlotte, Florida, at age 90. Perry is survived by his sister, Emma Sue Adams McDaniel, of Senoia, Georgia, and numerous nieces, nephews, cousins and friends. He was preceded in death by his wife of 50 years, Virginia Wyche Adams, of Elberton, Georgia, six siblings and his parents, Abram Thomas and Mary Columbia Tumlin Adams. Perry was born May 13, 1924 in the Salem Community, Noxubee County, Mississippi. As a youth, Perry served honorably in the U.S. Navy during World War II, Pacific Theatre. He paid dearly for this service, suffering injuries as his battleship came under heavy fire. A story-teller until the very end, Perry would entertain old and young alike with the memories of life, friendship and family. Perry began life on his parent’s farm in Salem and finished high school in Macon, Mississippi. He enjoyed the Christian heritage of a family of strong faith. An avid fisherman, Perry was eager to share his catches. He was the best friend you could have, often taking on the role of caregiver for those in need. Perry made his home both in Tignall, Georgia and in Punta Gorda, Florida. Funeral services were at 3:00 pm, Sunday, April 19th in the Chapel of Hicks Funeral Home, 231 Heard St., Elberton, GA 30635, (706) 283-2554. Interment followed at the Elmhurst Cemetery, Elberton, GA. Officiating was the Reverend Peter Yuh. You may leave online condolences for the family at www.hicksfuneral.com. Hicks Funeral Home was honored to care for the family of Mr. George Perry Adams.

The family of Mr. George Perry Adams created this Life Tributes page to make it easy to share your memories.

Send flowers to the Adams family.