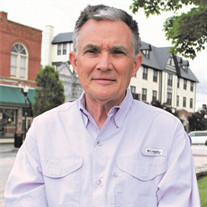 Gary Scott Jones, 64, of 512 Rhodes Drive in Elberton, passed away on Monday, November 1, 2021, at Augusta University Medical Center. Gary was the publisher of The Elberton Star. He originally worked in Elberton while attending the University of Georgia’s Henry W. Grady School of Journalism. While in college, he traveled the two lane road from Athens to Elberton to cover sports for Bob Williford and The Elberton Star. After working at the Athens Banner Herald, the Eatonton Messenger and Marietta Daily Journal, he moved to Elberton in 1996 to work for The Elbert County Examiner. He remained at The Elberton Star & Examiner after its merger and continued as editor and eventually publisher for The Elberton Star. CNI and the Elberton Star served as another family for him. He loved this community and its people. Gary fought for local causes he felt would better this town he chose as his home. Gary was born in Chattanooga, Tenn., and grew up in Rossville. He loved the area and always shared great stories of his beloved family, sporting feats and youthful shenanigans. His life was shaped by doting grandparents, a strong, smart mother, a musically-talented father who shared many life lessons, a terrific brother, loving aunts and rascally uncles. He understood the meaning of community from a young age so it’s no surprise he fit into the Elbert County community. After attending UGA, his love of sports continued through sports writing. As the years passed, his own family grew with the birth of children Elizabeth Ashley Jones and Christopher Eakin Jones. He was a father who not only loved his children but was very involved in teaching and mentoring them. Always one for story-telling, he shared tales of taking a door off its hinges when the room’s occupant kept slamming it or how a child seat occupant assured an officer of the law that ‘My Dad’s a really good guy!” when Gary was pulled over for speeding. During his years in Elberton, he was active first in Kiwanis and in recent years, the Rotary Club. Gary was a faithful member of First United Methodist Church of Elberton and attended a men’s Bible study group on Wednesday mornings at First Baptist Church. His faith was an integral part of the person the community knows. In 2003, Gary married Anna Grant Jones and they had more than 18 wonderful years together. They shared adventures, sorrows and love as married couples do. The Grant family embraced him as son, brother and uncle and was enriched by his presence and personality. Gary also devoted spending time with friends including lunchtimes discussing football, no matter the time of year, and playing golf for “points” as he wouldn’t admit to his Baptist wife that dollars were involved. He and Anna also traveled with friends, creating memories to be treasured in his absence. The most important person in his life is grandson Brian Jones Mauldin. Gary was always ready to tell a tale or share a picture of “Jonesy,” the greatest grandson in the world. Gary leaves behind a large, loving family including his wife, Anna; mother, Ann Williams; father, Claude Jones; brother, David Jones; sister-in-law, Laurie Jones; nephew, Josh Cole; daughter, Ashley Mauldin; son-in-law, Brian Mauldin; grandson, Jones Mauldin; son, Christopher Jones; sister-in-law, Melissa Grant; niece, Katie Grant Cobo; nephew, Ryan Cobo; great niece, Remy Kate Cobo; niece, Elizabeth Grant Barry; nephew, Jacob Barry and many members of the Scott and Jones family whom he loved very much. He was preceded in death by a grandson, Jackson Mauldin; brother-in-law, Bill Grant; and mother-in-law, Willene Grant. A celebration of his life and faith was held Thursday, November 4th at 2:00 pm at First United Methodist Church. A time of visitation for family and friends began at 12:00 noon until the hour of service. In his memory, donations may be made to First United Methodist Church of Elberton, the Elbert Memorial Hospital Foundation or the American Heart Association. Arrangements for Mr. Gary Jones were in the care of Hicks Funeral Home & Cremation Services of Elberton.

Gary Scott Jones, 64, of 512 Rhodes Drive in Elberton, passed away on Monday, November 1, 2021, at Augusta University Medical Center. Gary was the publisher of The Elberton Star. He originally worked in Elberton while attending the University... View Obituary & Service Information

The family of Mr. Gary Scott Jones created this Life Tributes page to make it easy to share your memories.