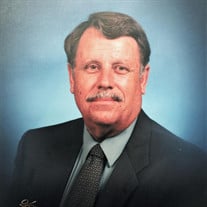 Mr. Earle Stovall Davis, Jr., 83, passed away Saturday, August 8, 2020, at his home. A native of Elberton, he was the son of the late Earle Stovall and Dolly McKelley Davis. A 1954 graduate of Nancy Hart Memorial High school, he attended Truett McConnell College as well as Georgia Tech where he studied engineering. Mr. Davis was retired from sales and marketing roles he held while at The City of Atlanta Planning and Zoning office, Allen National Granite, Republic Granite, the Westinghouse Corporation, and as the proprietor of Davis Insurance Agency. A deacon of several years, Earle was a faithful member of First Baptist Church of Elberton, where he taught Sunday School for 28 years to both younger and older men. Earle served the community as a member of the Junior Chamber of Commerce, a member of the Jaycees, as a past president of the local Kiwanis chapter, and as a member of the Elbert County Planning and Zoning Commission. By descent he was a member of the Georgia Society of the Sons of the American Revolution. Earle also enjoyed mornings at Bojangles as part of the infamous Romeo Club, as good friends routinely gathered. He loved the outdoors – hunting, farming and all of nature. In addition to his parents, Mr. Davis was preceded by his wife of fifty-five years, Deborah Louise Holland Davis, and a brother, B.W. Davis. Survivors include a daughter and son-in-law, Julie and Rick Weeks, and grandchildren Hannah Katherine Weeks and Ryan Davis Weeks. There was a visitation Thursday, August 13 from 10:00 – 11:00 a.m. at Hicks Funeral Home & Cremation Services, and following the visitation there was a crypt-side service in Forest Hills Memorial Park with Rev. Gary Purvis officiating. Bill Simmons, Robert Whitworth, David Mattox, Randy Smith and Randy Holland served as pallbearers. Entombment was in the Mausoleum in Forest Hills Memorial Park. Memorial donations may be made to First Baptist Church Elberton, 132 Heard St., Elberton, Ga. 30635, or American Heart Association, 7272 Greenville Ave, Dallas, TX. 75231- 4596. Arrangements for Mr. Earle Stovall Davis, Jr. were in the care of Hicks Funeral Home and Cremation Services.

Mr. Earle Stovall Davis, Jr., 83, passed away Saturday, August 8, 2020, at his home. A native of Elberton, he was the son of the late Earle Stovall and Dolly McKelley Davis. A 1954 graduate of Nancy Hart Memorial High school, he attended Truett... View Obituary & Service Information

The family of Mr. Earle Stovall Davis Jr. created this Life Tributes page to make it easy to share your memories.