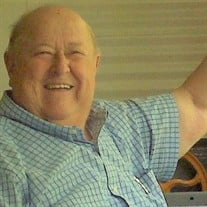 Mr. Denver Ernest Worley, 80, of Elberton, passed away Saturday, August 10, 2019 at Elbert Memorial Hospital with his family by his side. A native of Elberton, he was the son of the late Elbert Lafayette and Emily Pierce Adams Worley. In addition to his parents, he was preceded in death by brothers, Raymond, Zachary and Eddie, and sister, Kathy Worley. He was the husband of Mary Anne Black Worley, with whom he had celebrated 50 years of marriage. Denver, along with Mary Anne owned and operated the Dixie Burger for 35 years as well as Dixie Tour and Travel. He enjoyed traveling, collecting Coca Cola memorabilia, the Georgia Bulldogs, the Atlanta Braves and the Elbert County Blue Devils. He served in the U.S. Army and was a member of the Elberton Lions Club. He was a member of Elberton First United Methodist Church. Survivors in addition to his wife are daughters and sons-in-law, Denise and George Clark of Bonaire, and Brandi and Brad Seagraves of Carnesville; his grandchildren: Bailee Chitwood (Brian) of Carnesville, Victoria Clark of Athens, Brylee Seagraves of Carnesville, and Elizabeth Clark of Bonaire; and one great-grandchild, Lacey Chitwood. He also leaves behind one sister, Charlotte Williams (Charles) of Abbeville, SC, and several nieces and nephews. Funeral services were held on Monday, August 12th at 5:00 p.m. at Elberton First United Methodist Church with Rev Jim McCollough officiating. Interment followed in Forest Hills Memorial Park, with Lee Black, Ryan Black, Steve Black, Carter Edge, Travis Rice, Bobby Thomas, Jason Webb, and Lamar Williams serving as pallbearers. Members of the Lions Club and Mr. Craig Algood served as honorary pallbearers. A time of visitation at the church began at 3:30 p.m. just prior to the service. Floral tributes were graciously accepted, and memorial contributions may be made to T.J. and Friends at P.O. Box 6161, Elberton, or the Elberton Lions Club at 535 Rhodes Drive, Elberton, or Elberton First UMC at P.O. Box 398, Elberton, GA 30635. Arrangements for Mr. Denver Ernest Worley were in the care of Hicks Funeral Home and Cremation Services of Elberton.

Mr. Denver Ernest Worley, 80, of Elberton, passed away Saturday, August 10, 2019 at Elbert Memorial Hospital with his family by his side. A native of Elberton, he was the son of the late Elbert Lafayette and Emily Pierce Adams Worley. In addition... View Obituary & Service Information

The family of Mr. Denver Ernest Worley created this Life Tributes page to make it easy to share your memories.

Send flowers to the Worley family.