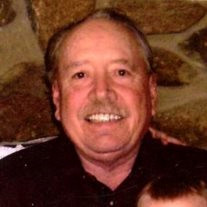 Mr. David Michael Edwards, 62, of Elberton, Georgia passed away Monday, February 10, 2014 at Elbert Memorial Hospital. Mr. Edwards was born in Elbert County to the late James Archibald and Sara Vickery Edwards. He was married to Vicki Eavenson Edwards for over 42 years. He began working in the granite industry at Southern Granite Co. in 1971, and became the owner in 1984. He was renowned in the granite industry for his ideas, talents, and knowledge of the industry. Mr. Edwards was a member of Calvary Presbyterian Church in Elberton. In addition to being an avid fisherman, Mr. Edwards was also a master craftsman for anything he put his mind to, and was known for his great sense of humor. He dearly loved his family, and his grandchildren were his pride and joy. Mr. Edwards is survived by his wife, Vicki Eavenson Edwards; one daughter, Melissa Dias and her husband, T.J.; one son, Jason Edwards and his wife, Tiffany; and four grandchildren: Madelyn Dias, Grayson Dias, Katelyn Edwards, and Brayden Edwards, all of Elberton. He also leaves behind a sister, Brenda Edwards, and a brother, Larry Edwards. In addition to his parents, Mr. Edwards was preceded in death by two sisters, Linda Edwards and Marsha Edwards. A service to celebrate Mr. Edwards’ life will be Saturday, February 15, 2014 at 3:30 p.m. in The Chapel of Hicks Funeral Home, Elberton, with Rev. Tim Adams and Mr. Tommy Fields officiating. Visitation will be from 1:30-3:30 p.m. on Saturday just prior to the service. Interment will be at Elmhurst Cemetery. Flowers will be accepted, or memorials may be made to the American Heart Association, P.O. Box 840692, Dallas, TX 75284. You may leave the family condolences online at www.hicksfuneral.com. The arrangements for Mr. David Michael Edwards are in the care of Hicks Funeral Home.

The family of Mr. David Michael Edwards created this Life Tributes page to make it easy to share your memories.

Send flowers to the Edwards family.