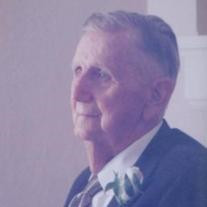 Lymon Crayton Phelps, 91, passed away on Friday, January 18, 2013, at his home in Elberton. A native of Elbert County, he was born on September 29, 1921 and was the son of the late Dozier King Phelps and the late Jessie Moon Phelps. He was a retired brick and tile contractor, and represented his District in the Southern Tile Association for several years. He was a proud veteran of World War II, serving in the United States Navy in the Pacific theater from 1942-1946. He is survived by his wife of 64 years, Jeane Clinkscales Phelps; a son and daughter-in-law, Chris and Pamelia Jo Phelps of Elberton; a daughter, Kim Phelps Hover of Elberton, wife of the late Sandy Hover; grandchildren Wesley Phelps, Jeana Phelps Henderson, Heath Hover and Haley Hover; and great-grandchildren Nolan Henderson, Logan Phelps and Chloe Henderson. He was a Mason and recipient of the 60 year service apron, a charter member and lifetime honorary member of the Board of Trustees of Camp Harmony Association, and served two terms as a member of the Elberton City Council. He especially enjoyed working with and supporting his community’s youth, serving as an advisor and baseball coach to the Demolays, the youth division of the Masons; coaching little league baseball for 15 years; serving as a youth counselor to the Methodist Youth Fellowship for several years; and supporting both with his presence and financially the high school sports programs and the True Blue Boosters Club. At the age of 55 he and his wife began a mutual love affair with western square dancing which continued until he was almost 80 years old and during which they square danced in 28 states, ranging from Georgia to Washington. He was a member of the First United Methodist Church in Elberton, where he at one time or another served on every committee that existed and he was an honorary permanent member of his church’s Administrative Board. He was a proud member of the Manning Co-ed Sunday School Class, the first co-ed class formed in his church. Services were held on Sunday, January 20, 2013 at 2:00 P.M. at the First United Methodist Church in Elberton, with visitation preceding in the Church Fellowship Hall from 12:30 P.M. until the time of the service. Burial followed in the Elmhurst Cemetery. Flowers are optional and memorials may be made to the Building and Organ Fund of the First United Methodist Church in Elberton. Hicks Funeral Home is in charge of arrangements.

Lymon Crayton Phelps, 91, passed away on Friday, January 18, 2013, at his home in Elberton. A native of Elbert County, he was born on September 29, 1921 and was the son of the late Dozier King Phelps and the late Jessie Moon Phelps. He was... View Obituary & Service Information

The family of Mr. Crayton Phelps created this Life Tributes page to make it easy to share your memories.

Send flowers to the Phelps family.