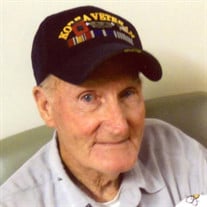 Mr. Claude Bromer Ivester, 80, of Dewy Rose, Georgia passed away Sunday morning, September 6, 2015 at his home. Mr. Ivester was born in Inman, South Carolina, son of the late William Cleave Ivester and Luvie P. Ivester Phillips. He was the husband of Barbara Thomley Ivester, with whom he had celebrated over 55 years of marriage. Mr. Ivester was a veteran of the United States Army, having served during the Korean War. He worked in the granite industry as a self-employed sandblaster with Lexington-Blue Granite Company, and attended the Bowman Church of God. In addition to his wife, Barbara Thomley Ivester, Mr. Ivester leaves behind five daughters: Dianne Lunceford and her husband, Randy, of Elberton, Robbie Wolfe of Bowman, Connie Garmon and her husband, Darryl, of Lawrenceville, Donna Gaddy and her husband, Bryan, of Dewy Rose, and Charlotte Parrott of Anderson, SC. He also leaves behind 12 grandchildren and 13 great-grandchildren. Mr. Ivester was preceded in death by 5 brothers and 1 sister. A service to celebrate Mr. Ivester’s life was held on Wednesday, September 9, 2015 at 11:00 a.m. in The Chapel of Hicks Funeral Home, with Pastor Stacy Lynch officiating. Visitation was Tuesday evening at Hicks Funeral Home from 6:00-8:00 p.m. Interment was at Elmhurst Cemetery. Online condolences may be expressed to the family at www.hicksfuneral.com. Arrangements for Mr. Claude B. Ivester were in the care of Hicks Funeral Home & Cremation Services of Elberton.

The family of Mr. Claude B. Ivester created this Life Tributes page to make it easy to share your memories.

Send flowers to the Ivester family.