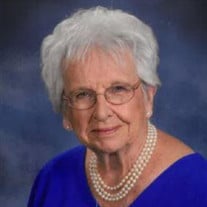 Charlotte Willene Jones Grant passed away peacefully at her home on Friday, Oct. 1, 2021. Willene was a native of Gainesville and a proud graduate of Gainesville High School (Class of 1948). Determined to become a nurse, she attended North Georgia College for two years in the pre-nursing program. Willene transferred to Emory University to the Woodruff School of Nursing and graduated with a BSN in 1952 and over the years she expanded and updated her knowledge through career continuing education classes. From 1952-1954, she worked at several hospitals with various nursing duties, including Emory University Hospital, Hall County Hospital and The Macon Hospital. At The Macon Hospital she was Medical and Surgical Nursing Instructor from 1954 until 1958. On March 7, 1954, Willene married William Forrest Grant of Chauncey at St. Paul Methodist Church in Gainesville. They started their marriage in Macon, affording her the opportunity to work at the hospital there. In 1958, the couple, along with son William Forrest Grant Jr., moved to Elberton as Willene's husband joined the law firm of Stapleton & Williford. In October of 1958 she started as Relief Night Supervisor at Elberton-Elbert County Hospital and stayed in that position for a year. After seeing the lack of nurses in the area, in February of 1959, Willene started the Vocational School of Practical Nursing. She organized and established curriculum and clinical practice and served as director and instructor. Willene remained at the school until 1966 when daughter Anna Willene Grant was born. This school continued to educate nurses until 1990. In 1970, she returned to the Elberton-Elbert County Hospital as Administrative Assistant in Nursing where she planned and wrote policy and procedure books for the hospital as well as planned, established and instructed in an in-service education program for nursing service. Willene also served as Director of Nursing from 1974-1979. With assistance from the Elberton Civic League, she pioneered the hospital's Auxiliary program. After retirement, she volunteered with this group. After being out of the medical field for several years, she returned to Elbert Memorial Hospital in 1988 as Director of Quality Management Systems, a department which includes Quality Assurance, Risk Management, Safety, Utilization Review, Medical Staff Services and Medical Records. After retirement, she returned to EMH one more time to assist with preparation for Joint Commission Accreditation. She was also a CNA instructor for Athens Technical College. With all her accomplishments in the nursing field she devoted much of her time to church, family and civic duties. She belonged to First Baptist Church of Elberton until 2005, when she began attending First Methodist Church of Elberton. Her church years were invested in teaching children and adults about the joy of faith in Christ. She loved to study the Bible in an in-depth manner. Willene spent many years in the Elberton Civic League working to help the community. Throughout her adult life, she loved to support her husband and children, and later, her two granddaughters, in their endeavors. She was also an avid reader, bridge player, lover of musicals and traveler. Willene was preceded in death by her parents, brother, husband and son. She was also preceded in death by her great-grandson Brian Jackson Mauldin. She leaves behind her daughter and husband, Gary; daughter-in-law, Melissa Seymour Grant; two granddaughters, Katie Grant Cobo, husband Ryan and great-granddaughter Remy Kate Cobo; Elizabeth Grant Barry and husband Jacob. Other survivors include granddaughter Ashley Jones Mauldin, husband Brian and great-grandson Jones Mauldin and grandson Christopher Jones. She also leaves behind much-loved nieces and nephews through her Jones family and Grant family. The family will be forever indebted to loving helpers Johnnie Perrin, Annie Askew, Barbara Biggs and Sandra Hall. In remembrance of Willene, please make donations to Elbert Memorial Hospital Foundation Fund, First Baptist Church of Elberton or First Methodist Church of Elberton. Willene is whole and healed and in the presence of her Savior. We rejoice in that but will miss her presence on this earth. A Graveside Service to celebrate the life of Mrs. Grant was held on Saturday, October 9, 2021 at 10:00 a.m. in Elmhurst Cemetery. Arrangements for Charlotte Willene Jones Grant were in the care of Hicks Funeral Home & Cremation Services of Elberton.

Charlotte Willene Jones Grant passed away peacefully at her home on Friday, Oct. 1, 2021. Willene was a native of Gainesville and a proud graduate of Gainesville High School (Class of 1948). Determined to become a nurse, she attended North Georgia... View Obituary & Service Information

The family of Mrs. Charlotte Willene Jones Grant created this Life Tributes page to make it easy to share your memories.

Charlotte Willene Jones Grant passed away peacefully at her home...

Send flowers to the Grant family.