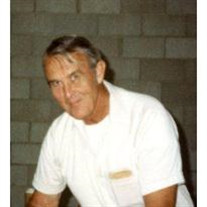 Mr. Charles Ward Snellings, Sr., 81, of Elberton went home to be with our Lord on Friday, April 27, 2012 at Elbert Memorial Hospital. Mr. Snellings was born on May 17, 1930 to his parents Duncan and Madge Snellings of Elberton. He celebrated 61 years of marriage with his wife, Evelyn, on March 9, 2012. Mr. Snellings was a member of Middleton United Methodist Church. In 1947, at the young age of 17, Mr. Snellings joined the United States Air Force. A retired veteran proudly serving his country for 20 years, Mr. Snellings served a tour of duty in the Korean Conflict and in the Vietnam War as the Food Service Supervisor and Instructor. A very loving and devoted husband, father, and grandfather, he took great pride in all his endeavors. After retiring from the Air Force in 1967 he returned to Elberton and became the Wildlife Game Warden with the Department of Natural Resources with the State of Georgia. After a few years with the state, Mr. Snellings wanted to pursue his dream by opening the S & S Grill on South McIntosh with his brother, Gene. Many remember his famous and delicious bar-b-que and stew. He later went on to Athens Technical School to become a welding instructor, and in 1977 he built and became the owner of The Quick Stop which he owned for 29 years. He was a kind and loving Christian man with a wonderful smile, a big heart, and was one who never met a stranger. Left to cherish his wonderful memories are his wife, Evelyn Anderson Snellings; two daughters: Diane Johnson Culpepper (Mike), and Rhonda Graham (Alfred); and one son, Charles W. Snellings, Jr.. He also leaves behind his beloved grandchildren: Brandon Eaves, Tia Johnson Emery, Brent Eaves, Blake Eaves, Lance Johnson, Landon Ward Johnson, and Charles Snellings, III; three precious great-grandchildren: Aidan & Evan Emery, and newborn Layton Johnson. One of ten children, Mr. Snellings is survived by his last brother, Dorris Snellings (Betsy). A celebration of Mr. Snellings’ life will be held on Sunday, April 29, 2012 at 2:00 p.m. at The Chapel of Hicks Funeral Home. Reverend Lacey Bowcock of the Middleton Charge will be officiating. Visitation for family and friends will be Saturday, April 28, 2012 from 6:00-8:00 p.m. at Hicks Funeral Home. Interment will be at the Middleton United Methodist Church with military honors. Expressions of sympathy may be made to Middleton Methodist Church, P.O. Box 660, Elberton, GA 30635. The family will receive friends at the home at 1276 Middleton Church Rd., Elberton, GA. Hicks Funeral Home is respectfully in charge of the arrangements for Mr. Charles Ward Snellings, Sr.

Mr. Charles Ward Snellings, Sr., 81, of Elberton went home to be with our Lord on Friday, April 27, 2012 at Elbert Memorial Hospital. Mr. Snellings was born on May 17, 1930 to his parents Duncan and Madge Snellings of Elberton. He celebrated... View Obituary & Service Information

The family of Charles Ward Snellings created this Life Tributes page to make it easy to share your memories.

Send flowers to the Snellings family.